Just finished one of the most interesting quilts that I have worked on in a while.  I give you....  WONDER WOMAN! 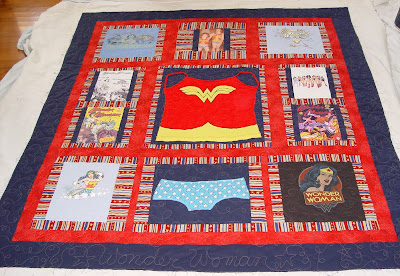 Or, her undies, at least!
This quilt was lovingly made by my friend Karen Wagoner.  We went to college together at NCSU, got married about the same time, and each had two children at about the same time.  We lost track of each other until she showed up on my doorstep to bring me her first quilts!
She has a daughter who still loves Wonder Woman.  On one of Karen's trips to bring me more quilts, she brought some of the Wonder Woman apparel that her daughter had collected over the years.  After deciding how to work with that chemise, I suggested she might find some more images on the web that she could transfer to fabric.  Done!
These are copies of comic book covers.  The one at the top is from 1942...perhaps the first?  Notice it is in black and white. 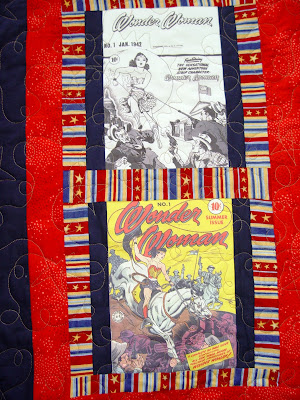 Of course, the top and, uh, briefs, are the star attraction.  Well, for all of WW's many male admirers, they were always the attraction, right?  Surely not just the invisible airplane and golden lariat? 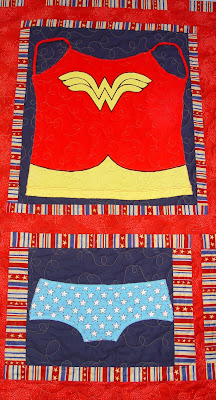 Karen appliqued them to the background by machine blanket-stitch.

There are some well-loved T-shirts in the quilt. 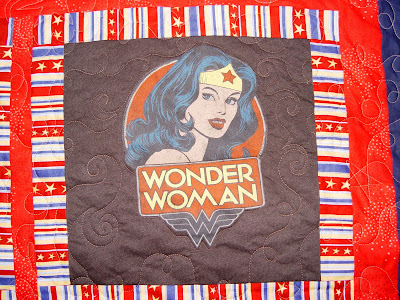 But my very favorite is this wonderful photo transfer of the two beautiful sisters in the Wonder Woman "Underoos!" 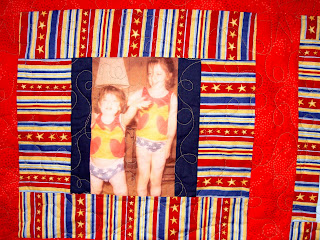 They still make Underoos, although I don't think the brand name is as widely used. They usually have a T-shirt top or vest, and underpants that resemble the costumes worn by Superheros. 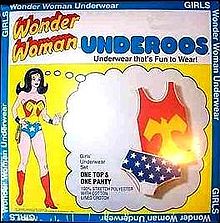 Now they also have Dora the Explorer, SpongeBob, and other non-Super types of children's characters.  I wonder if wearing SpongeBob underneath your clothes gives kids the same feeling of confidence as wearing Superman duds?  Probably not.

I admired my little grandson's Spiderman Underoos about a year ago, and he disdainfully told me, "Gigi, they're called UNNERWEARS."

I have fond memories of my own two little blond boys in their Superman pajamas complete with capes.  There is a little pair of Dave's waiting in the cedar chest for his own little Superhero someday.

Or maybe they will become part of a quilt!
I also finished a little patriotic-themed quilt for Karen's grandson.  It was also quilted with lots of stars. 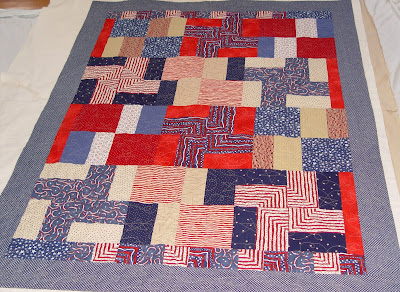 I like to add children's names to their quilts if the makers agree. 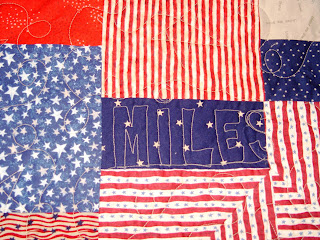 He does not need to worry about passing this quilt down to his little sister.  I think I have already quilted at least three for Evie, including one of my all-time favorite children's quilts. 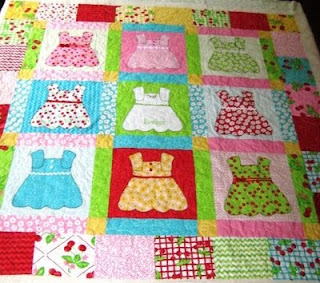 I love your little dresses quilt! It is so sweet and the colors are so vibrant!