I have been waiting to post this little guy for several weeks now.  It was a birthday present for my father.
﻿
I actually began this project during my Pamela Allen online workshop last February. We were instructed to choose paintings of flowers and leaves and use them to make fabric studies . My father had sent a photocopy of this painting on a card, and I used it for one of my fabric sketches. 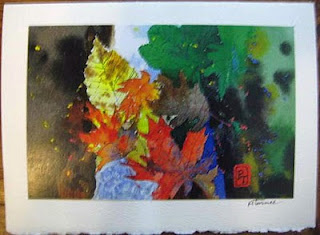 When his September birthday was getting near, I revised that little nature sketch and completed this small art quilt, which is about 6" x 8". I added some gold metallic paint for some shine, and sewed on some glass beads for sparkle. I quilted it on my domestic sewing machien, not the longarm.


My father now lives in the North Carolina mountains, not too far from our place in Laurel Springs. We have not been able to get together in person since his birthday. The last two times we have gone up there, he has gone to my brother's lake house in Tennessee. So, I finally decided to mail his quilt to him.
Since I have been interested in mixed media and visual art journaling, I have been looking on You-Tube and other websites for tutorials. I saw this one by Roben-Marie Smith on making artsy mailing envelopes, and decided to make one for mailing this project. 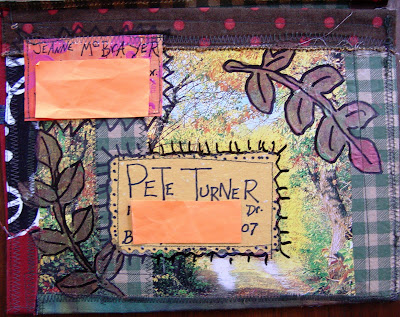 You take a file folder, use glue stick to attach fabric and papers, and stitch over the whole thing on the sewing machine. I used a foam leaf stamp and Lumiere paints to add the gleaming leaves, and did some outlining and doodling with Sharpie markers. The beautiful autumn scene behind the address label is the cover of a Coldwater Creek catalog. (For privacy, I blocked out the addresses in this photo.)﻿﻿


The back has random strips of fabric and paper, and I added some lettering in the squares. 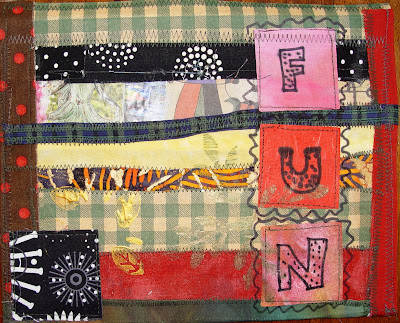 I chose to line the inside of my envelope with a coordinating piece of scrapbook cardstock in a orange polka-dot.  You would not really have to line it.

Funny story:  Dad called me last night to thank me for the beautiful fabric postcard!  He said he took it to the dinner table to show it off last night, and his dinner companions all admired it, but wondered what was inside.  He said, No, this is a fabric postcard.  They took bets on whether there was something inside.  He did not want to tear into it if he wasn't supposed to!

The problem was that I did not start with a large enough base to make a big flap.  Instead of a regular file folder with a tab, I used a hanging file folder and had to cut off the casings that hold the metal hanger.  In order to keep the narrow flap closed, I had to use a glue gun to seal the flap.

So, I told Dad to get out his mat knife and carefully open the flap at the top without cutting through the contents.  Ta-Da!  Now he wants to frame his original painting, my fabric interpretation AND the mailing envelope together!

Posted by Jeanne Turner McBrayer at 9:29 AM

Beautiful quilt and a great story!

it is always fun to get something in the mail...Especially art! beautiful job, I love the leaves.