I gave up on figuring out Photoshop by myself, and went to Barnes and Noble for some help. I found a relatively inexpensive tutorial called Photoshop Elements 7 in Easy Steps, by Nick Vandome. Relatively, because some of the books were more than forty dollars! So I have been exploring a little, using some photographs I took from my home garden yesterday. 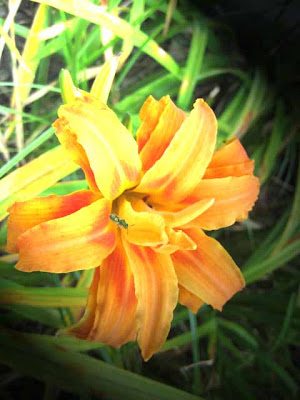 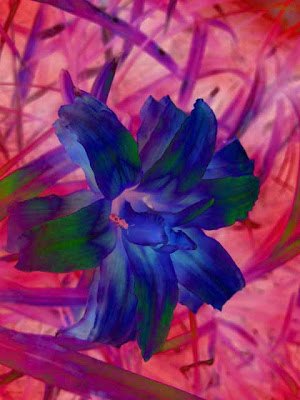 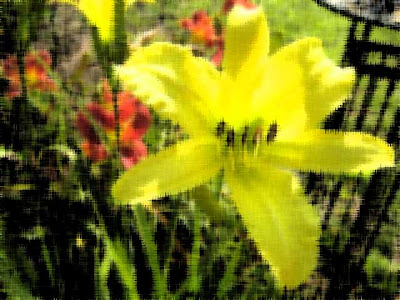 I am really going to have fun with this program!

After being away for a week, it was interesting to see how the summer flowers had blossomed in my absence. Daylilies, bachelor buttons, the first sunflower, monarda, even the butterfly bushes.

My old doggy, Maggy, spent the week at the kennel where she has been "going to camp" since she was eight weeks old. Although she has often been aggressive with other dogs in her own territory, she has always been surprisingly meek and submissive at the kennel and also at the vet. Now she is apparently a revered old lady. The kennel offers specialty "suites" for an extra fee, meaning large air-conditioned rooms with decoration themes like The Masters and Nascar. I always kind of scoffed at this- how could a dog have a preference for golf-themed wallpaper? Anyway, when I picked her up, I found out that they had given Maggy a suite at no extra charge because they were very crowded and thought she would enjoy the quiet and the extra space. And, she came out acting like a puppy, and she looked shiny as a new penny after her bath. And smelled good!
Here she is, un-PhotoShopped, with her old gray muzzle and her tongue hanging out.

Maggy will be a thirteen-year old senior citizen in August.
Posted by Jeanne Turner McBrayer at 7:52 AM

Jeanne,
I have been having fun with Photoshop Elements for a couple of years now and love it. My favorite place for help is http://www.scrappersguide.com/. I ordered her CD training lessons and learned everything I know about Elements. There is a learning curve and I still learn something new everytime I use it. I suggest signing up for Linda's (scrappersguide) newsletter and weekly tips.
Have fun! Laura
P.S. I live in Raleigh and I'm a member of the quilt guild, too!

Those are some fun photos you've been dressing up with your new prezzy! How fun! I will have to pay attention to that tip that Laura just left you and visit that Scrapper's guide.

Well, it almost looks like Maggie is going to need those really thick glasses or cataract surgery soon, LOL! She looks like an oldy, but a goody! :)