The Rest of the Story

In my last post, I told the story of the little log cabin quilt that recently came home to me after thirteen years.  Here, as Paul Harvey would say, is "the rest of the story."


As I mentioned, my father and mother were both excellent dancers.  In addition to ballroom dancing, they participated in square dance and round dance after moving to North Carolina.  In fact, they met at a school dance back in junior high, and were sweethearts ever since.


Here is a picture of my father next to the portrait he painted of my mother wearing his favorite red dress.  As I recall, he painted this while she was still living.  Dad looks like he is wearing a tuxedo with a snappy vest- perhaps to the wedding of one of my younger siblings.  The note on the back says 1996.  Mom was taken from us way too soon from cancer in 1984. 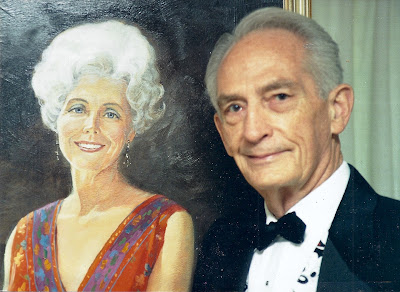 I actually got to wear this dress once.  Charlie and I got married while we were still college students.  I had a great job working at the student bookstore on campus at North Carolina State University for about three years.  Shortly before his graduation, Charlie landed a job at the university business office.  That Christmas, the chancellor invited the entire business office and their dates to his lovely home for a party.  I made a panicked call to my mother because I had nothing appropriate to wear.  She brought me the red dress and, I think, even took a few stitches in it to make it fit me a little better.  When we arrived at the door, Chancellor Caldwell greeted us himself, and seemed confused about which one of us was the business office employee!  But he gave me effusive compliments on my "beautiful Christmas dress."


As I wrote previously, Dad brought me the dress in 1998 to see if I could make a quilt from it.  The first attempt was a colorful wall hanging, but it was evident that he really wanted a snuggle quilt.  So, with lots of fabric left from this floor-length gown, I began again.


You can imagine how hard it was for me to cut into this dress the first time! I remembered the gown as being sort of a polished cotton, dark red with a border print.  Of course, the garment was around thirty years old when I started the  project, so it may have faded a bit.  But it was a shiny, thin fabric, sort of a silky polyester, perhaps. And it definitely looked more orange than red.  I used a French-fuse interfacing to back the parts that I used.

The blocks are Album Blocks, and the orange center of each is from Mom's dress.  The rest of the block fabrics are hand-dyed or commercial cottons.

Here is the second quilt made from Mother's Dancing Dress. 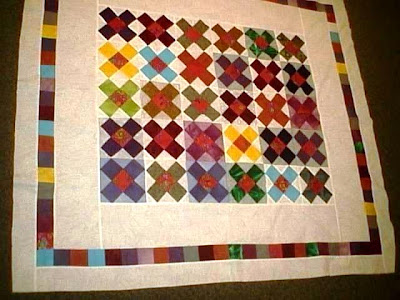 This one has been hung on the wall over Dad's bed, used as a lap quilt, tucked over his recliner...but always lovingly used.  The other quilt got packed away when he sold his house and moved to Boone, and was not unearthed until he moved out last spring.

A final funny end to the story:  when my sister Katy went up to Boone to get Dad out of the nursing home, she went by his apartment to get a few things that he would need.  The first time I visited Dad at her home, he was still mostly bedridden.  She made a point of mentioning that she had brought his quilt, thinking how pleased I would be.  Unfortunately, the quilt she retrieved from the apartment was a blue Wal-mart patchwork bedspread!  Oh, well, he's got his paintings and his books and his quilt with him now.  And he is doing much better, and that's all that counts!
Posted by Jeanne Turner McBrayer at 9:30 PM

great story, I love reading stories like this. love the quilt from her dress...and the painting is amazing

This couldn't be more heart-warming if you tried. I know it brought you joy with every stitch...and, will for a long time! So sweet that your Dad wanted it!

What a beautiful story!