Working on a "Heritage" Quilt

Today I decided to tackle a quilting project that I have been avoiding for awhile.

A year and half, to be exact!

This is the first of three more quilt tops made by my sister-in-law Debbie's late grandmother. I have already finished three of these in the past. By the time Grandma Helen made these, her vision was starting to deteriorate, and the piecing is not the best. But, Debbie would love to have these finished so they can be used.

Debbie, if you are reading this, don't faint, I have finally gotten started!

This is the first of two almost identical Blazing Star quilts, approximately twin-sized. You can see the center of the star does not exactly meet up... 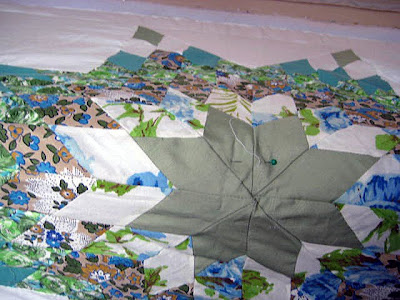 and there is lots of extra fullness in almost all of the seams. This can lead to puckers, pleats, and an uneven quilt. By the way, those yellow diamonds with white lines through them appear to be either a coarse linen dish towel, or perhaps a 70"s pant suit fabric. My thread does not like it! 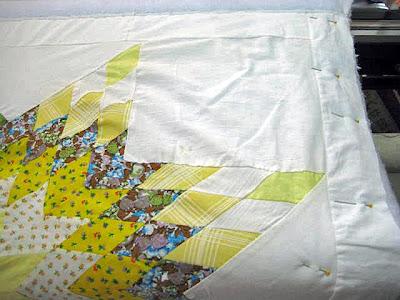 I decided to try a puffy polyester batting to take up some of the fullness. It is appropriately named "Puff" by Quilters Dream. It is soft and fluffy and relatively high loft. 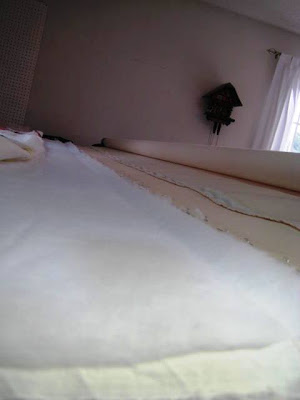 So far, my biggest problem has been thread breaking. A lot of thread breaking! I should have used a thin polyester thread like The Bottom Line or So Fine. However, it looks nice. Pardon the thread tails in all these pictures. I will deal with those after quilting. 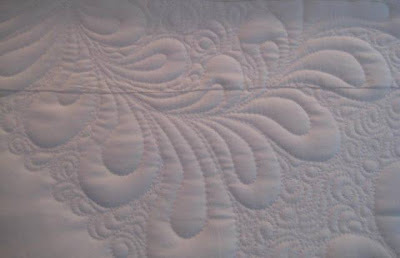 I used a stencil to make feather circles and parts of feather circles in the white areas along the top edge. Lots of tight quilting in between to flatten the quilt and make the feathers pop out. 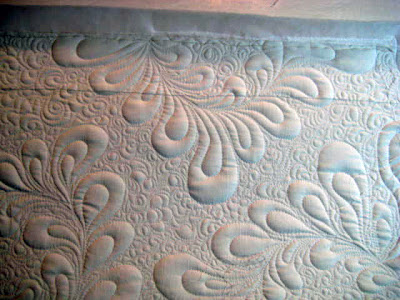 Here is one corner with a full circle wreath. 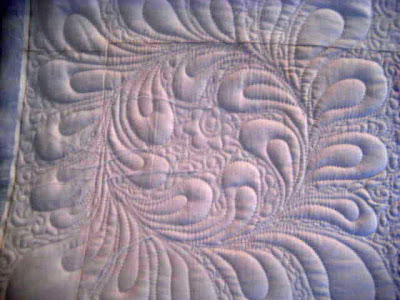 In the star diamonds, I am using one of Diana Phillips' Line Dancing designs. 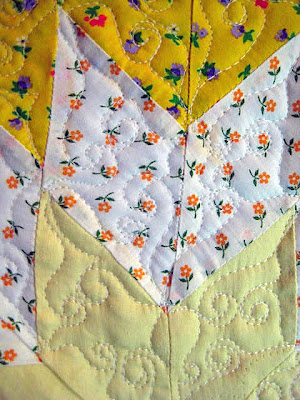 This is going to be slow going, but I am determined!

But it's going to be AWESOME!

Yes!! You can do IT !!!!
It's looking good so far !! I am sitting on a project now and I need ti push through and get it done .Can't wait to see it done!!
Those feathers a real pretty!!
bp

It's amazing what you've done with a top that didn't look all that promising-- your quilting makes all the difference!

Looks to me like you're doing a terrific job on a deserving project! Her g'ma would approve.