In the midst of my painting, packing, and preparations for our floor remodeling project, I have sent in a couple of quilt entries to Innovations 2008, a quilt show in the Seattle, Washington area. This is probably the last outing for my little wall quilt, Something "Girly." Innovations is a Viewer's Choice, or Peer-Judged quilt show, and this little quilt has been pretty popular in other shows. 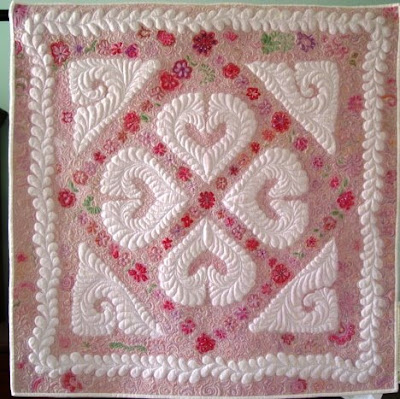 And, for his first official show, I have entered The Green Man. I have never posted the final picture of him, although I wrote about him when he was a work-in-progress. I finally decided he was finished! I just need to make him a sleeve and a label. You can read his story by clicking on the above link . 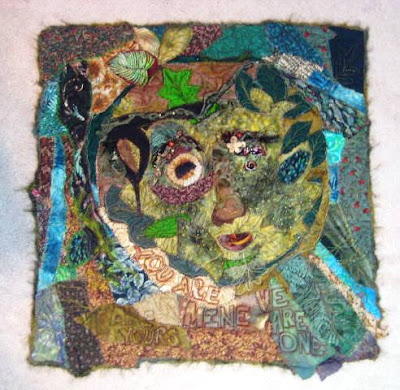 The main difference since the last picture is his nose. I wanted it to have some dimension. I finally decided to sculpt a nose out of wool roving and other fibers, and stitch it down.

Now I ask you: could there be any two different styles of quilt in the same show by the same person? LOL! One is so feminine and pretty, and the other...well, it has been interesting to watch people's reactions to him. I have shown him at the CyberBee and my local bee meetings, and also took him to school with me last May for the third grade quilt lessons.

People either love him or hate him! One of the third graders actually stuck out her tongue and starting making "barfing" motions when she saw him. One adult at CyberBee had a more refined, but similar response as this quilt was passed around. I have entered him in the "Unusual" category, which seems just perfect for him!

I have one more entry to prepare. I think I will put "Carolina Woodland Spring" in our state fair. This one is the same technique as Something "Girly", but with patchwork as well. It was shown at MQX last spring, but has not been exhibited locally. 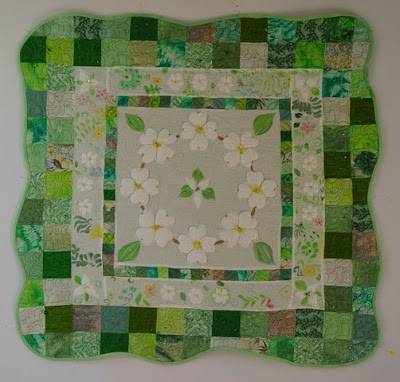 The NC State Fair is not my favorite quilt venue, because the quilts get short shrift when compared to, let's say, cows, pies, 4-H projects, and even needlework. The quilts that don't win any recognition are rolled up and dumped on a table. The ribbon winners are folded about four times and draped over a pegboard wall so you see about an eight-inch section. The big winners are fully displayed. Between the trip to Raleigh to bring the quilt, the dour lady in charge of entries, the sawdust, and a second trip to pick it up, it is hardly worth it. But, I will give it one more try since I have not entered a quilt there in several years.

Another long-armer recently wrote that at the Idaho State Fair, her quilts won multiple ribbons, and she collected $38.00 in prize money. Her sister submitted a plate of brownies and won $150! Now, what takes longer to make...an heirloom quilt or a pan of brownies? Oh, well!

Hurricane Hanna seems to be veering to the east, which they now say will bring the Raleigh area only rain (which we still need very badly) and gusty winds.

So, I think we will leave tonight for the mountains without worrying too much about hurricane preparations. We are on schedule to have the kitchen floor installed on Monday morning, and I have all that area packed, cleaned, and painted.

I hope that you have a great weekend, and if you are in the path of the storm, batten down the hatches and stay safe!

Posted by Jeanne Turner McBrayer at 8:09 AM

I HEART Green Man. I heart him big time! He has really come to life with all you've done to him, and I think he is a big time success. Thanks for sharing his journey with us!

I hope you got lots of rain from Hanna. We didn't get as much as we needed but I'm grateful for all that we did get. I drove home from my Craft Week vacation today but waited until the storm passed to drive.

I love the pink quilt it is so pretty! I hope you are safe and get lot's of helpful rain with Hurricane Hannah.

Yep, double personality, no doubt about it! But, I like them both...so I might be as well. Your traditional friends will give you a hard time about greenie, and vise versa for the girly.

Beautiful work on all three. Those dogwood flowers are so great!

Beautiful quilts, you are so talented. I particularly love the pink quilt, so dainty. I am inviting you to participate in a Fall into Fall Quilters Blog giveaway that I am hosting. Come on over and check it out.

Hmmm let's see Something Girly - or - a fresh cow pie.