My Former Life as a Model 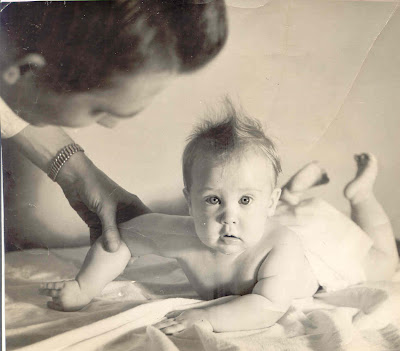 In yesterday's post I mentioned that there was a round of story-telling at my father's birthday party on Saturday. Each of the seven children and some of the other guests stood up and told stories about my father. Many of my sibling's stories included the times they were left behind or lost on some outing with my father, on Jones Beach in Long Island, an aircraft carrier...and all ended with how each one of us felt loved and cherished by both our mother and father despite the large family.

My story was about growing up with an artist for a father. I thought everyone's father was able to draw and paint! Isn't that what fathers do? I had access to fun toys like pastels, paints, colored inks, speedball pens, and opaque projectors. But there was a price to pay when the breadwinner is working in the advertising business in New York City. Many times Dad stayed up all night working in the studio at home to finish an illustration by a deadline. For almost every vacation, my mother had to do all the packing and then the driving because Dad had to finish a project before we went away. Dad's jobs often included human figures because of his talent at drawing them realistically. To help with that effort, he would sometimes use his Polaroid camera to shoot the scene using models to help with shadows, folds of clothing, proportions, etc. Sometimes he and the other artists in New York would "pose" for each other at the studio. Sometimes he would hire models from an agency.

The story I told at the party included my favorite story about my father. In his early days in New York in the late 1940's, he had to do an illustration featuring a beautiful, elegant woman, and asked the agency to provide a model. He could only afford a top model for a half hour, but he split the hour's fee with another artist who also needed a female to model for a love scene.The agency said that they had a young girl just out of high school who was available. Dad asked her if she had an evening dress she could wear at the session, and she brought her high school prom dress. When she showed up, he admired her beauty and finished his part of the hour's photography session. Then the other artist asked Dad to be the male model in the love scene, because he couldn't afford a professional male model. So, happy to oblige, Dad got to do some hugging and smooching with this beautiful young lady.

Are you curious yet? Scroll to the end of this post to find out the identity of the mystery Top Model.
Anyway, after working in the city all day, Dad would often have to come home and do some photography for a job using his own supply of models of all ages. Either my mother would take pictures of him, or he would photograph her and/or one or more of us. The living room would be transformed with backdrop, photo lights, props, and tripod. For this kind of modeling, you did not need a flawless complexion or perfect smile. You just had to stand still, often in some uncomfortable position, for several minutes at a time, with a big smile on your face. All of our childhood albums include strange photos like this one. 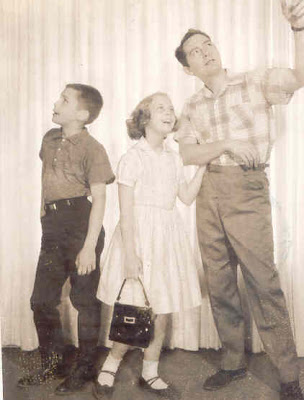 My brother Chris and I were included on this shot, which was supposed to be a scene in a cave where we were admiring the stalactites. This was one of the illustrations for a fifth grade science textbook. When we moved to North Carolina from New York, my sister was in the fifth grade, and this was her science book! Her teacher did not believe her when she said that her father had painted all the illustrations, and those were her sister and brothers in the pictures.
The photo at the top of this post is my first "posing" job, with my father rearranging my arms for the shoot. This one was for an ad for Johnson and Johnson baby products.
Here are a few others: 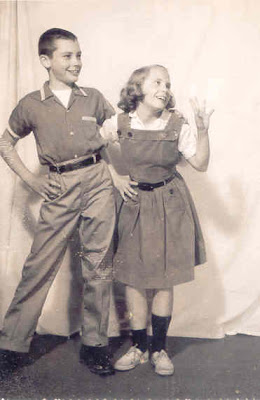 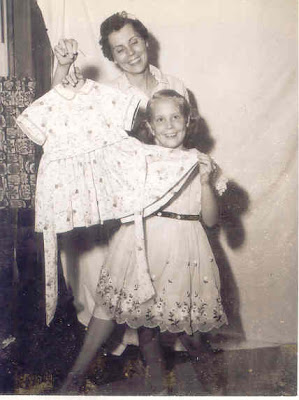 with my mother...don't remember the product. Something for ironing?with Mom and my brother Tim this time. I think this was for the Kool-Aid national art competition, for which my father won First Prize and got some big bucks. 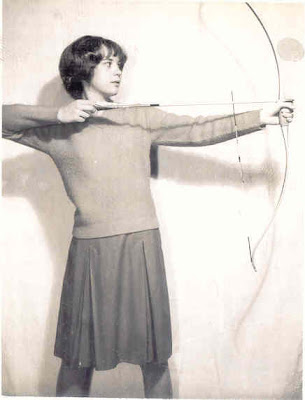 I have no idea why I was required to pose with bow and arrow...but I was about sixteen, and here is the artwork that my father magically created from this skinny daughter. It is framed along with another illustration. 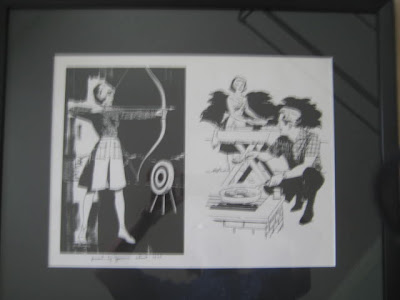 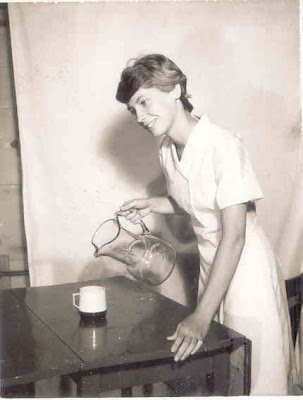 Wow, I was skinny! 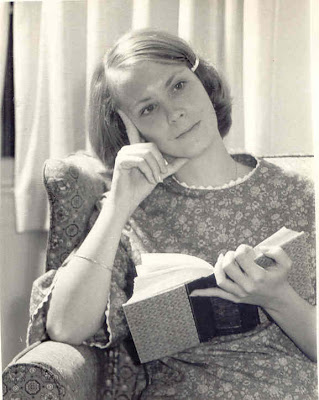 This was probably the easiest modeling job ever...sitting with a Readers' Digest Condensed Book in my hands. 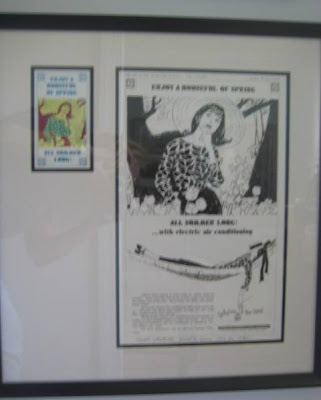 Could that photo have evolved into this drawing??? This one was for an insert in the power company's monthly bill. The hammock gig was not too bad, either... 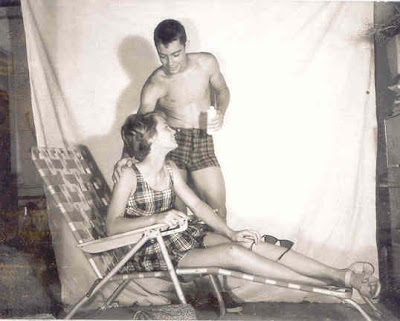 As Chris and I got older, we became the models for most of the adult figures, thus relieving my mother from being the adult female model . My father could just shoot the pictures instead of also having to pose. Here is some sort of suntan lotion ad, I guess. 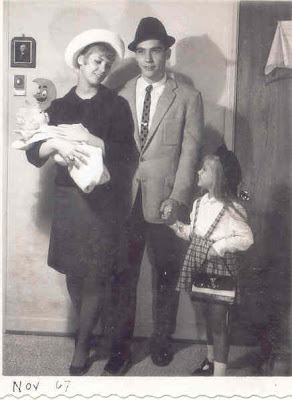 Ah, the happy family...with baby doll and little girl from across the street who helped out. We did have a shortage of little girls in the family, but plenty of little boys. 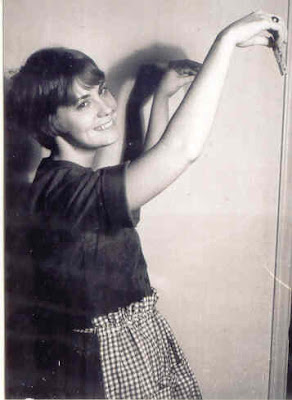 Happily doing laundry...this is the apron I made in sixth grade Home Ec. I still have it!

One of my father's big clients in North Carolina was the Hanes Company. We did LOTS of photo shoots for a sweatshirt catalog. 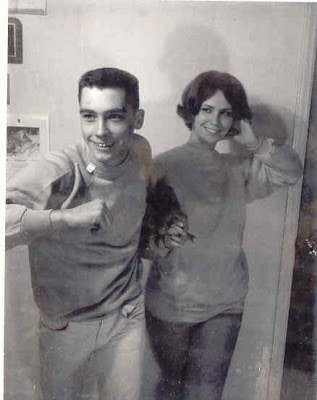 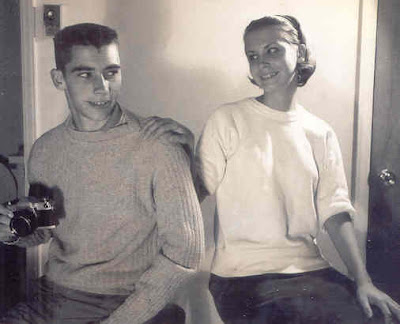 Thanks for taking a trip back in time with me.

And now for the reveal...

The lovely young model was none other than Grace Kelly, who went on to become a famous leading lady of Hollywood, and then Princess of Monaco. Sure wish we had those photographs! 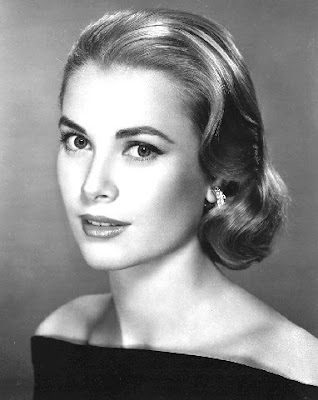 Posted by Jeanne Turner McBrayer at 8:40 AM

What an awesome story! The "model" at the end totally blew me away--I never would have guessed!

What a great story!

What an amazing story! I became completely engrossed in your family's antics! Well, they weren't exactly antics as you were all helping your father with his job! LOL! I couldn't tear myself away, it was delightfully fascinating. I also never would've guess that the "top model" was Grace Kelly!

LOved this post!! The pictures, the big reveal... fabulous!

Wow! Wow! Wow!
I enjoyed your post and story. You have many wonderful memories with your family. Beautiful!

Your father is special--so are you.

What an amazing childhood you had! Tell me - after all those photos, are you camera shy or not? (I totally freeze up as soon as I have a camera pointed at me.)
When did your father realize that he had been posing with a celebrity to be?
This is exactly the sort of post that keeps people returning to your blog. Thank you for sharing!
Angelika

What a great story! HA....and now I look and see Vicki's comment! I guess great minds do think alike! I loved looking at all of the photos and hearing about your family.

Thanks for leaving a comment on my blog. We are home after our weeklong trip. There are more chapels to visit and lots more bbq to try, but we need to wait till the gas crunch is over........besides, there is art to be made and blogs to be posted!

Very cool story Jeanne. What an amazing dad (what amazing parents and family!) you have.
Hey, I'll bet you're glad Hanes didn't make underwear back then!!!