Mystery #1: Death of the Songbirds
Recently, I have been puzzled and distressed by finding three dead birds on my back deck, just behind the suspended bird feeder. They did not have any obvious signs of having been attacked, so I was afraid they had been flying into the tall windows of our kitchen and knocking their little bird brains. However, I believe I now have found the culprit. 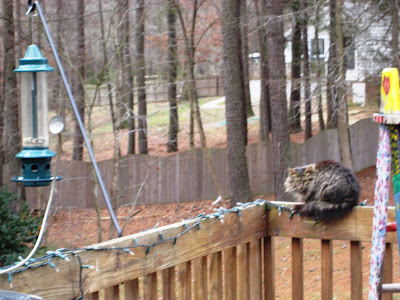 I believe this is the cat that belongs to our sloppy next-door neighbors...the ones that still have the deflated swimming pool in the yard. It looked right at home during Christmas, when they put three of those giant electrified inflatable decorations in the yard, which deflated during the day. 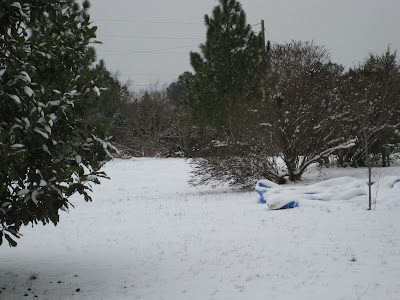 Joe promised last summer that they would resume the painting of the house (abandoned two years ago with half yellow, half blue paint job) when they took down the pool and could put up a scaffold. So, I guess they are still trying to put off the paint job.

Observant readers will note that we still have our Christmas lights on the deck, but they stay up all year and look nice all twinkling in white lights while we are entertaining or enjoying a glass of wine outside.

Anyway, this little kitty has been making itself right at home on our front and back porches. I have found him sunning himself from my favorite padded chair in the screened porch, as well. And this is the same one that Maggy chased thirty feet up a tree on the one occasion when she seemed to have enough energy. I have begun calling this cat IT, for Intrepid Trespasser.

Mystery #2: The Case of the Missing Dog Food
The other mystery involved the dog food and bird seed I keep in our garage. We buy cartons of Moist and Meaty at Sam's Club, which has packets of soft dog food in cellophane packets. Several times recently, I picked up a packet to feed Maggy, only to find it half gone. And the last time I picked up a fresh bag of bird seed from the Sam's carton, I left a trail from the back door to the feeder as the seeds dropped out of a little hole in the bag.

That mystery was solved when I walked in the garage and there was IT actually sitting IN the dog food box. She did not even jump out when I approached. She just crouched down behind the flap on the box and acted invisible. That did not work out too well for her.

However, she may have had an accomplice in pet food theft. Another time when I was reaching for the dog food, there appeared to be some activity in the tall plastic trash can I keep by the back door. Bravely climbing the the steps to the house so I could peer down into the trash can, I saw a little field mouse doing vertical leaps like he was on a Pogo Stick. He checked in, but couldn't check out. I suspect Mr. Mousie was the bird seed taster. At least, I hope it was Mr. Mousie and not Mrs. Mousie, who might have found a nice warm spot for her family in the garage somewhere.

This reminds me of something that happened at our previous house in North Raleigh. It was a story-and-a-half, with walk-in attic space available from our bedroom upstairs. One year I opened the bedroom door to get out the Christmas decorations, and was greeted by a family of flying squirrels, leaping from one end of the house to the other like the Flying Zucchini Brothers from the beloved Muppet Show. Isn't it fun when you share your home with wildlife?

Posted by Jeanne Turner McBrayer at 10:36 AM

As young as I was, I will never forget my father chasing flying squirrels around the house that night!