I got a nice surprise in the mail today.  One of my art quilts that has been on exhibition arrived back home. This quilt has been part of the Breaking Traditions exhibit organized to raise money for charity.  Sponsored by Lynn Krawzcik, it raised money for A Place to Bark, an animal rescue organization.  The theme was "Home."  My quilt was named Mountain Home.  I made it during a previous online class with Pamela Allen.  The challenge for that lesson was to create an art quilt that was a personal symbol.  If you have followed this blog at all, you know that creeks, mountains and wildlife are a big part of my life.  We have to cross Peak Creek to get "home" to our mountain cabin.
The owner of yesterday's customer quilt has not seen her quilt yet, and is heading out of town on a trip.  I don't want to reveal her quilt via the Internet until she has seen it or given permission, so it may be awhile.
A few days ago I started training my new dog, Kasey, with Don Sullivan's Perfect Dog system.  I saw it on an infomercial, and decided to spring for it after several bad experiences on walks.  Kasey is an almost perfect house dog, very sweet-natured, but is occasionally aggressive to other dogs when we are walking on greenways.  She also barks aggressively whenever someone rings the doorbell or knocks.  And, she does not always come when called if she is off leash.
The system involves "correcting" your dog by yanking on what he calls the Command Collar.    Apparently it is uncomfortable, but it has not made Kasey yelp with pain or anything like that.  You are supposed to start with gentle correction, raising the level of correction until the dog complies with the desired command.
On Day 1, Monday, we had a perfect walk.  You are not supposed to let the dog pull on the leash at all.  Kasey responded to this with no problem.  No pulling.  We also did the Sit Command.  She already knew Sit, but we added a hand signal and she has to sit until released.  Very good marks here, too.
Yesterday, I added the Down Command.  The dog must drop down when given the Down Command and hand signal.  This one was a little harder.  I had to make her drop down.  Now she knows it, but is not consistent yet.  They are also supposed to stay down until released.  She is getting the hang of it.
Today, I thought we would walk through the new Heritage neighborhoods near us, which have nice roads but no traffic yet.  At the intersection with Rogers Road, traffic was backed up in all directions due to road paving, so I made a U-turn and we went to the Mill Bridge Park via the back way in Rolesville.
Normally, if I get there before lunch, there might be one other car in the parking lot.  Not today.
We got there just in time for a special event. 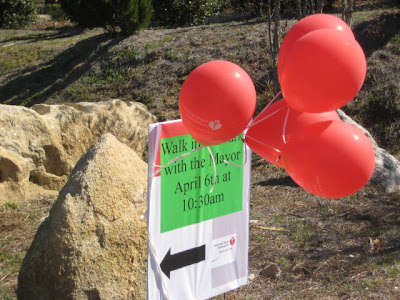 The parking lot was full, and there was a fire truck and police car at the far end.
I was not sure I wanted to test our new skills in front of about forty people including the mayor and police chief of Rolesville.  We took the trail that forks to the right of the main trail and stayed along the creek and woods. 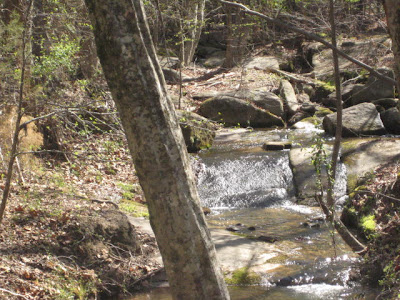 ﻿
Since that walk was fairly short and the morning was beautiful, I decided to try a new trail.  This one begins at the back entrance of Main Street Park in Rolesville. 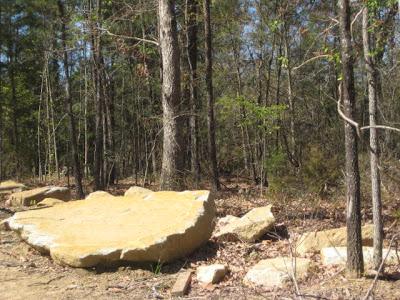 I have been on the Main Street Park trail when it was just a paved loop through the woods behind the playground where I take my grandchildren.  It has been greatly expanded, and was a lovely walk.  Rolesville is an area where geologic forces have deposited huge expanses of granite on the surface.  The park entrance from the Granite Falls neighborhood is lined with big chunks of granite rock.  Shortly after commencing the trail, there is a vast expanse of granite. 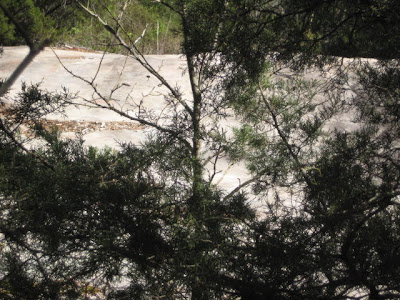 You can walk onto this rocky area.  Dogs can drink from the puddle from yesterday's rain. 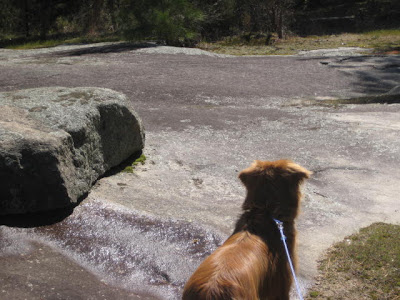 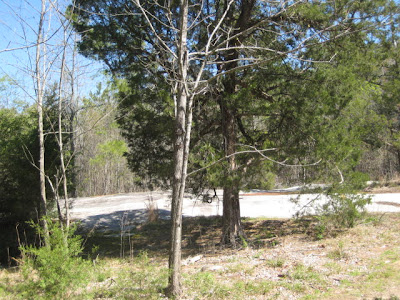 The trail has markers every one tenth mile. 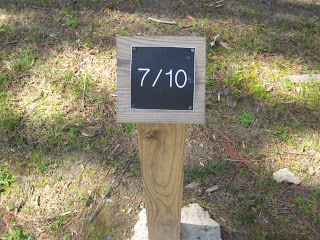 They have added many wooden bird houses of assorted sizes. 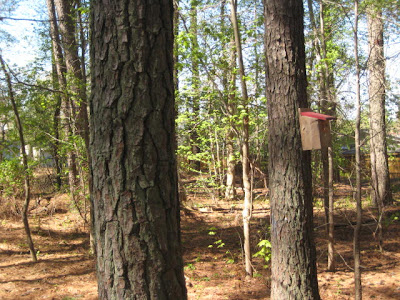 The trail continues on to the Main Street play ground, and loops back around.  The part nearest the playground has exercise stations and equipment along the way. 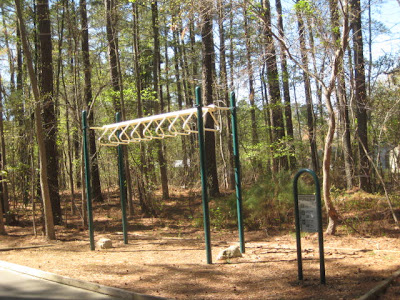 This nice bench and planter area was built by a Boy Scout for his Eagle Scout project. 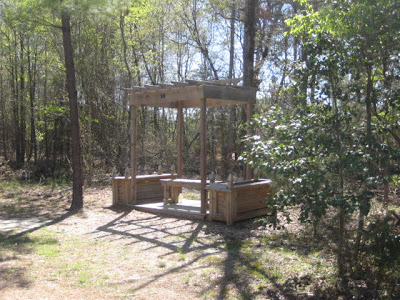 Farther on there is a frog pond 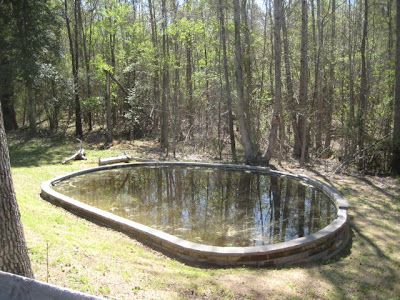 and a new wooden bridge. 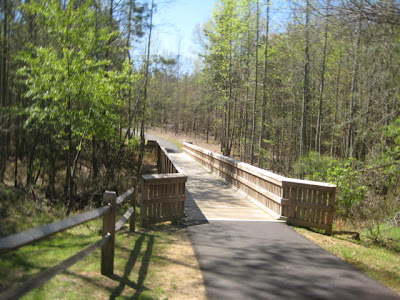 Behind the elementary school is a large picnic shelter. 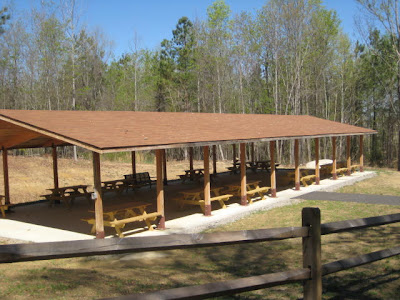 I was quite happy to find these additional trails. Kasey did very well about not pulling.  We met one man walking two dogs.  She started to do her aggressive barking, but I was able to easily get her to sit quietly until they passed by.  Much better!
It is nice to see the trees starting to leaf out again. 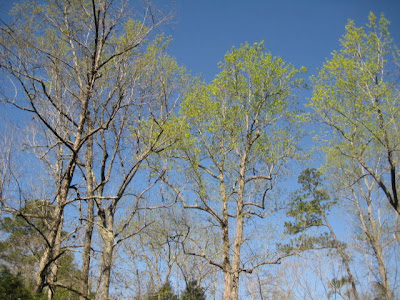 At my house, the camellias are just about to finish their bloom time 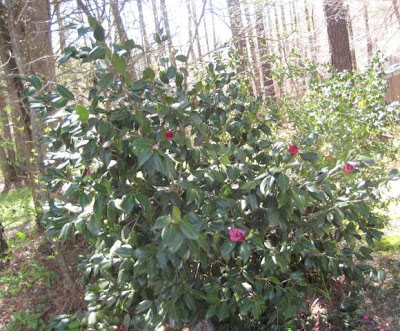 but my azaleas are getting ready to burst open. 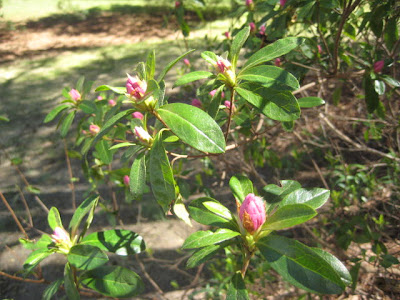 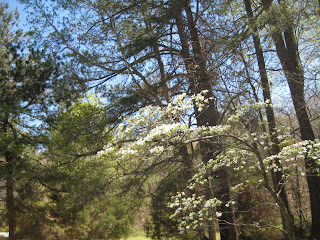 The loropetalum (Chinese Fringe Trees) are in glorious bloom. 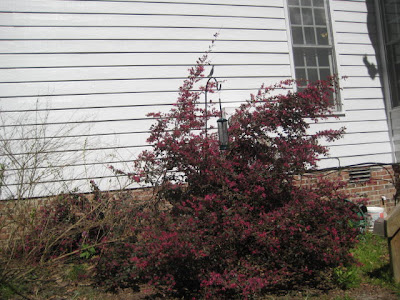 and my bulbs are blooming all along my shrub border next to my front porch. 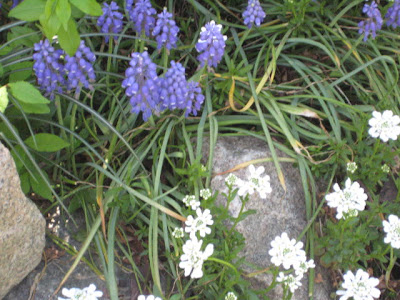 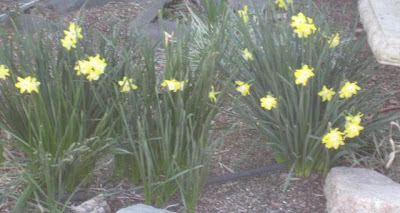 I hope you are enjoying your day, too!
Posted by Jeanne Turner McBrayer at 1:07 PM

I think your spring is almost two weeks behind us. The dogwoods look extra nice this year I think. :-)