Our family beach weekend is now behind us.  We got there early on Friday and enjoyed some time on the beach.  It was a little cool and breezy, but we had a lot of fun.  Of course, you can't keep the kids out of the water. 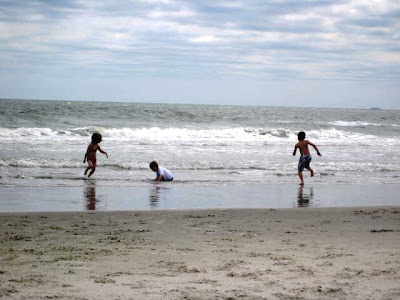 There was literally no one else on the beach on Friday afternoon.  We let the dogs Roo and Kasey run loose to enjoy the waves.  Kasey did not do so well.  First she took off after a seagull, and ran right up over the dunes and through people's back yards.  Then she took off after one on the beach, and ran like a rocket.  I expected maybe we could pick her up in Wilmington.  Fortunately, she came back and stayed on the leash after that. 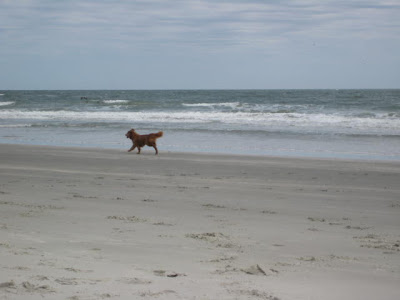 Saturday was predicted to be a total washout with storms all day.  I got up early and walked Kasey to the end of the island.  Most of the North Carolina beaches are barrier islands, separated from the mainland by the Intercoastal Waterway or various sounds.  At the north end of Sunset Beach, there is a channel that separates it from Ocean Isle Beach.  You can see some of the development on Ocean Isle, including the eyesore of a towering condominium.  The dark clouds were building. 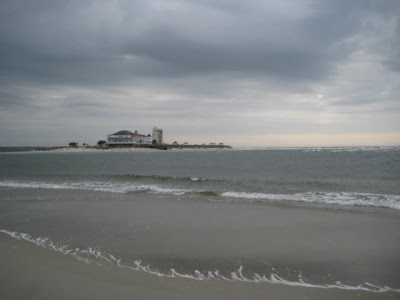 It rained a little when we got back.  Then, surprisingly, it quit raining.  We all went out to the beach for a few hours, although it was cool and very gusty.  It was a nice surprise to be able to enjoy the beach. 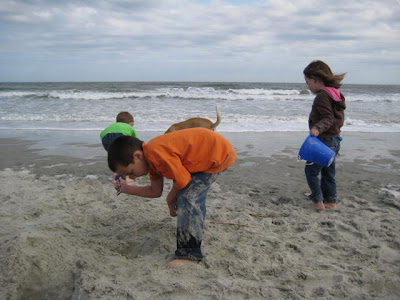 While we were out there, we got a call from my brother-in-law Kenny with the first of the really bad news from Mother Nature.  He said that there had been seven inches of rain overnight in Laurel Springs where our family mountain compound is located.  None of the family was up there, but there were reports that the waters from Peak Creek had completely covered our bridge, and that the pond was in jeopardy because the earthen dam was giving way.  If that happened, our road to the cabin would be washed out.  We are still waiting for word on that situation.  There was nothing we could do about it from the beach.  We will go up next weekend and see what needs to be done.
When we got tired of being battered by the wind, we went back to the cottage and tried flying kites.  It actually was a little too windy to fly kites! 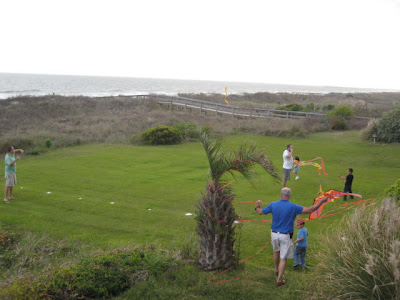 Only Lily's ladybug finally got a good ride...and then took off in a strong gust of wind and disappeared. 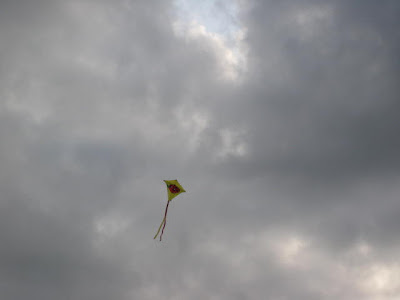 So, we finally came inside the cottage.  We wanted to see if it was going to be stormy again, so we turned on The Weather Channel.
Oh, my goodness.
There were lines of severe storms all across North Carolina.
Sanford, North Carolina had been hit hard by a tornado, and a Lowe's Home Improvement big box store had been destroyed.  We continued to watch in horror as the storm went through Raleigh.
It is a bizarre feeling to see on The Weather Channel that the storm is headed right between Wake Forest and Rolesville, North Carolina.
Our house is exactly between Wake Forest and Rolesville.
Once it passed, we called our next-door neighbor.  He said the tornado had not touched down in our neighborhood.  The power was off, but the roof was still on.
We have been finding out much more about storm damage in the area since we have been home.  Three children were killed in a mobile home in Northeast Raleigh.  There are many people homeless as the tornado tore through their neighborhoods.  Our hearts go out to all.  There were storms all over North Carolina and other states on Saturday afternoon.
That night it rained again at the beach, but only while we were in Calabash eating supper.  It stopped before we even finished.  When we got home, there was a full moon, the stars were coming out, and there was an awesome lightning show all around the moon.
The next morning I woke up very early and was walking on the beach at sunrise.  This time there were lots of other people walking, jogging, and shell-seeking.  There were some incredibly gorgeous sunrise views. 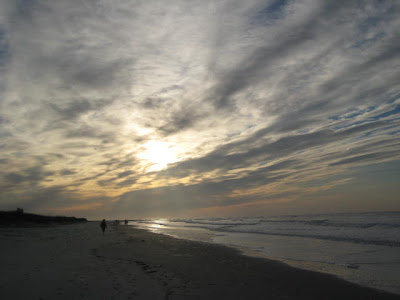 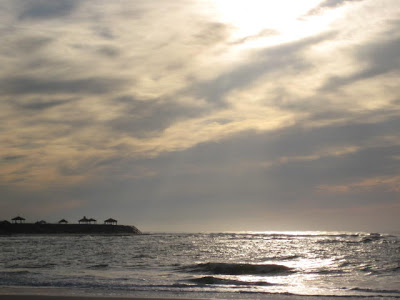 I like it when the water and beach turn all silvery in the morning sun. 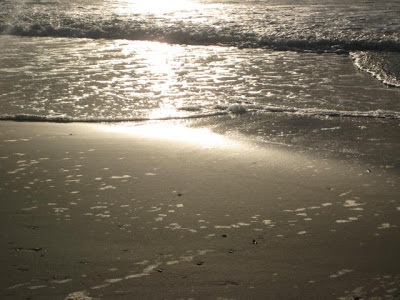 They have roped off all the dunes at the very end of the island as it is time for birds to be nesting. 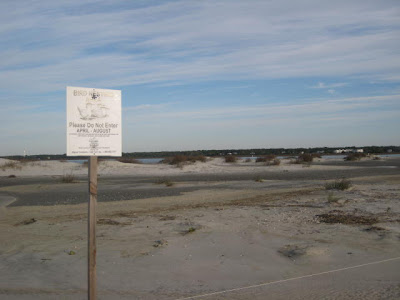 Kasey and I walked around the point and viewed the island from the bay side. Hundreds of birds were lined up on the sandbar. 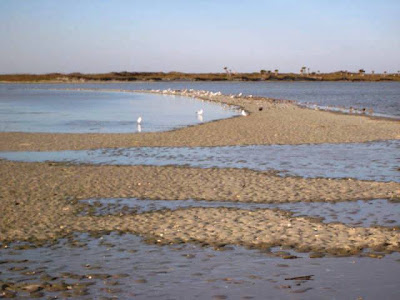 You can see the new bridge towering over the island from the bay side. 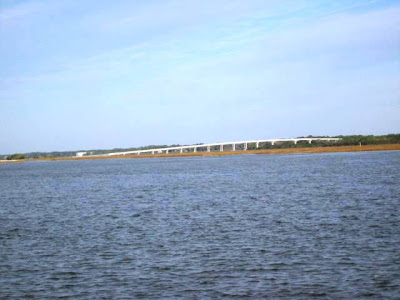 It was a memorable walk.  There were many birds along the shore.  Here are some pelicans cruising along the tops of the waves. 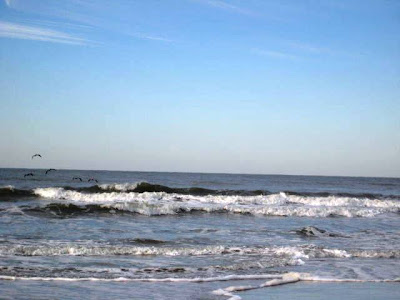 We had to check out of the cottage by 10:00 AM, but it was so nice that Dave, Emily, Charlie, the dogs, and I all stayed for a few more hours down at the public beach by the pier.  What a difference a day makes!  It was calm, sunny, and beautiful. 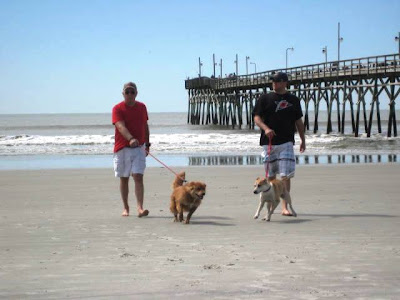 On the ride home, we saw some evidence of tornado damage along I-40.  A car twisted into strange shapes.  Woods with trees sheared off, containing road signs and pieces of twisted metal.  When we got home, we found only some branches down, lawn furniture piled up, and a few trees down in the woods.  The power was on.  We are counting our blessings.
Posted by Jeanne Turner McBrayer at 8:21 AM

What a beautiful day. Great pictures. Thanks for sharing them.