Although I have lived in the Raleigh, North Carolina for almost fifty years, I was born in Manhatten, and grew up in the suburbs of New York and New Jersey.  We moved out of the big city when the third child was born in our family, and three children under five was getting difficult to manage in a small apartment!  We moved to a house in New City Park, New York, with a big yard, lots of trees, safe streets, and tons of other Baby Boomer children to play with.   There was a lake where I learned to swim and ice skate. 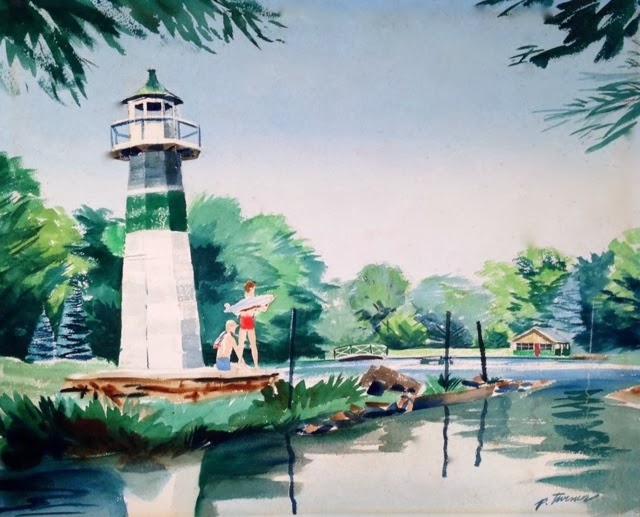 My father was a commercial artist.  He painted this watercolor of New City Park Lake sometime between 1952 and 1958.  In fact, those boys could be my brothers Chris and Tim!
There was a raft or dock which you had to be able to swim to in order to be allowed in the "Deep End."  There was a clubhouse and and a few homes on the lake.
The reason I am writing about this now is that this painting just surfaced on Facebook!  One of my friends from the New City neighborhood has lept in touch with me all these years, and messages me about this painting!  I don't remember it, but it is signed by my father (Pete Turner) and is clearly his recognizable work.
Having discovered the New City Park Lake web page, I started reading through the messages and photos.  The painting is owned by a woman who lives on the lake, and tells me that this is still the view of her back yard!
Additionally, one of the members of the Facebook group used to live down the street from us, in another Catholic family with tons of kids.
This has been an unexpected trip back in time to my childhood.  I even found a photo on the site of my old elementary school, Chestnut Grove. 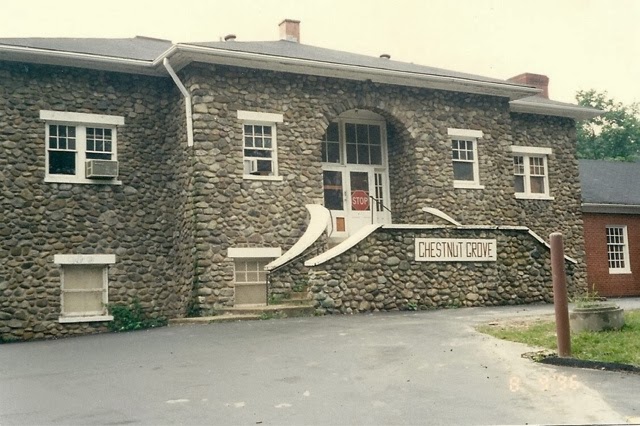 Look at that stone work!  I remember the classrooms had "cloakrooms" where we could shuck off our boots and snow suits or leggings after walking to school.  The desks were so old that they had holes for inkwells!
I am so glad that my father signed his artwork.  Quilters, don't forget to sign and label your work!  The quilts you make today could tell a story some day in the future!
Posted by Jeanne Turner McBrayer at 9:11 AM