We are back at home after a wonderful, long weekend of music, friendship and fun at Merlefest in Wilkesboro, NC.   The days were hot and sunny, and the nights cool and breezy.  Here is your intrepid blogger dressing for the weather. 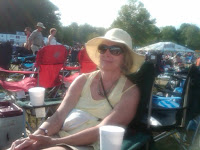 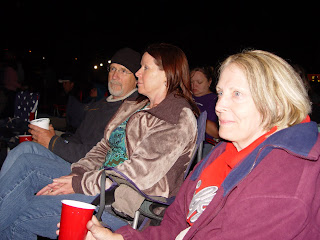 We had never been to Merlefest and were very impressed with organization of this huge event.  There were about fourteen venues going on at all times.  The main stage was the Doc and Merle Watson Theater, which had a large video screen to the left.  In order to minimize downtime while different bands set up, there was a log cabin stage on which smaller groups performed.  Our first show on the main stage was Donna and the Buffalo, and who was in the audience enjoying the show but Zac Brown of country music fame, along with his bodyguard.  Our friends saw him on Thursday night, and said it was the highlight of all the concerts for them. 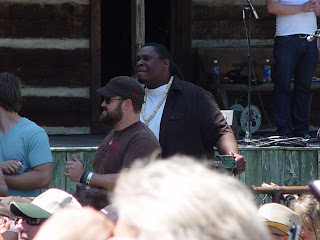 We walked up to an indoor auditorium for the first of Doc Watson's concerts.  This one was with his son Merle's old band, Frosty Morn.  The audience was very appreciative and listened closely to every comment Doc made.  He only played about forty-five minutes.  When you are 87, you have to pace yourself! 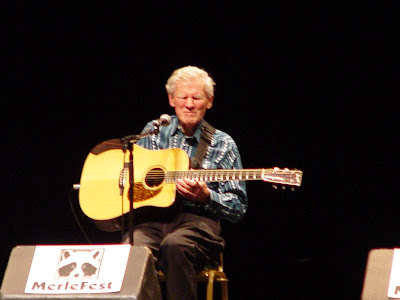 We were glad we saw him on the small, intimate stage, because when he played on the Main Stage there was so much crowd activity.
On Friday night we saw Dierks Bentley, who gave a great concert, but we were blown away by the Sam Bush Band.  We did not recognize the name Sam Bush, but then we realized that he was in the Blue Grass groups Seldom Scene and New Grass Revival.  What a musician, and what a dynamic group!
On Saturday night we really enjoyed seeing Steve Martin perform on the banjo with the Steep Canyon Rangers.  As you might expect, he was very humorous, often poking fun at himself as the rich LA outsider to the Blue Grass scene.  He finished his set with the old King Tut song. 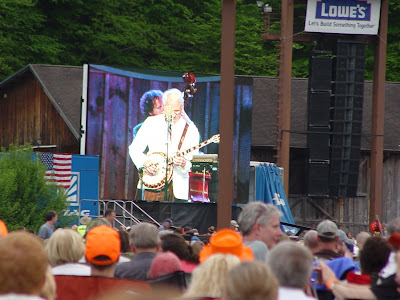 On Sunday, our friends left for home, and just Charlie and I stayed over for the Avett Brothers concert.  Our son Dave and his friends became fans when they were at East Carolina University and the Avetts played at local nightclubs.  Now they have just returned from a world tour and are receiving a lot of acclaim in the music industry.  They are great musicians and often changed the instruments they played (guitar, banjo, piano...)
It was extremely hot Sunday afternoon.  We walked around and enjoyed some of the sights.  Here is a finished sand sculpture commemorating the festival. 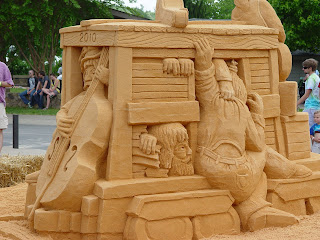 We decided to spend Sunday night in the mountains instead of driving home after the concert.  Charlie and I enjoyed a quiet ride across the mountains on the Gator at sunset. 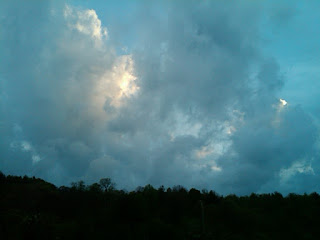 I totally forgot you were here. I wouldn't have been able to make it anyway. Looks like you had a blast. My brother worked security and was telling me about Zac Browns security man, I can see him in your picture. That's a big man.

Donna and the Buffalo - a Recca Favorite!!! Every year we head out the Shakori Hills Grass Roots Festival (in Silk Hope) and see "The Herd" (that's what they call the band) and about 10 or so more acts at that festival. You can camp out at the Shakori Farm (like a mini Woodstock) and we usually go out on the motorcycle (there's one in spring and fall - we usually go to the one in the fall I think it's around October 10th.). Too funny. We'll have to check out the Merle Fest next year!!
http://www.donnathebuffalo.com/
Funnier still - I bought Blaise Donna and the Buffalo's cd for Christmas. (he loves them!)
So glad you had a great time and the weather agreed with you. It's going to get humid this week - ick.