Exploring St. Louis on my Own

The night of our arrival in St. Louis, everyone from my husband's Raleigh offices were treated to pretty good seats at Busch Stadium for the Cardinals-Astros game.  We sat along the third base line just to the left of home plate.  The stadium has a gorgeous view of the Gateway Arch . 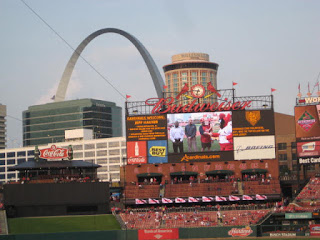 I thought maybe the arch would be lit at night, but apparently not. 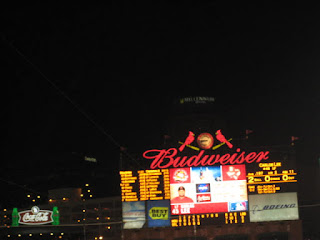 One of the guys who had been to St. Louis before said that the Anheuser-Busch Clydesdales and stage coach ran around the stadium before the game, but they did not put in an appearance for us.
The next morning, I was the only one who did not have to attend financial seminars, so I took off on my own for some exploration.  Our hotel was only eight blocks from the Mississippi River and the Gateway Arch, so I walked down there first.   It had rained overnight but I only experienced a  few drops of rain. The sky was rather threatening, though! 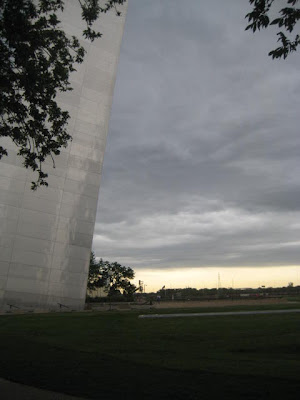 I decided to do the touristy thing and ride to the top of the arch in a tram.  To do this, you have to go below ground, walk through a metal door that is only four feet tall by about two feet wide, and ride in a tram car that must have been built for Hobbits.  It has a curved ceiling that you cannot stand in, and five little seats around the edge.
Once you are at the top, you have to lean on your belly to see out the windows which face outward.  Since you can see the arch from the stadium, it made sense to view the stadium from the arch. 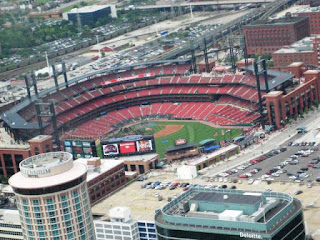 And of course, there were good views of the Big Muddy, the mighty Mississippi. 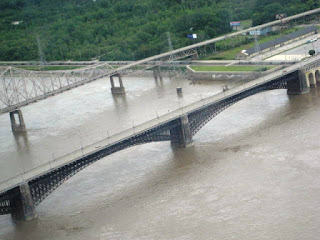 Right next to the arch is a riverboat.  Charlie said that last time he was in St. Louis, the company treated them to dinner and a play on the river boat. 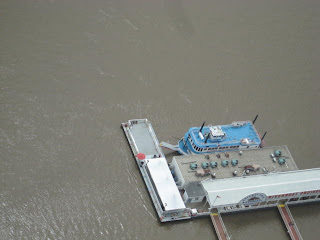 At the base of the arch there are some nice attractions, such as the Museum of Westward Expansion.  There are many western artifacts, excerpts from Lewis and Clark's journal, gorgeous photographic wall murals of the rivers and landscapes of their journey to the Pacific.  I was pleased that I did not have to drive my family to town in a rustic cart like this old relic. 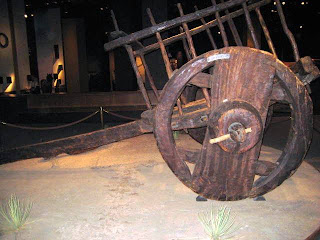 After I walked through the museum I got brave enough to take the Metro light rail to visit Forest Park.  After riding the subway, you have to get out and wait for a city bus to take you to the zoo and art museum area of the park, which is actually larger than New York's Central Park.  I made it there with no problem.  The weather became sunny and nice.
This zoo has lots of natural habitats for the animals, beautiful landscaping, and areas to view the animals up close.  My favorite of all was the Mama and Baby Orangutan. 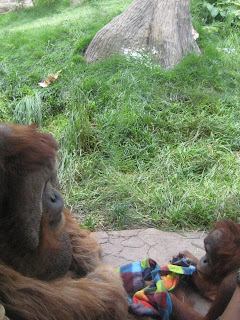 Mama was kind of sluggish and reminded me of Jabba the Hut from Star Wars, but the little girl was having a ball, swinging on her vine and aggravating her mother. 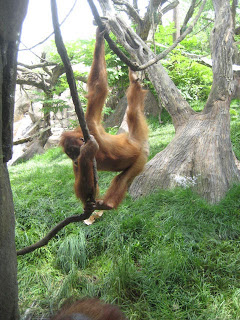 There were lots of birds to see, including a lake area, cypress swamp, and this enclosed area with a gorgeous roof support. 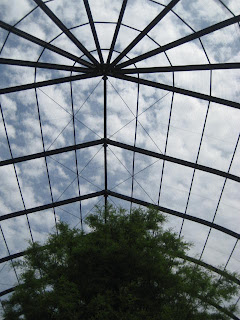 This flock of flamingos enjoyed their own little island area. 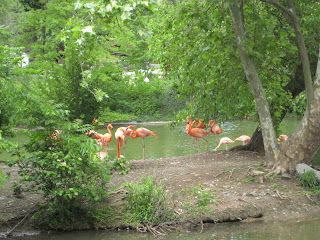 The most interesting bird was the Hornbill.  He looks like he is wearing a banana on the top of his head.  He also was very active, bouncing all around the branches and making loud squawks. 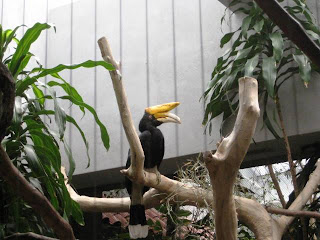 I thought these two "addux" looked like the Push-Me-Pull-You from Dr. Doolittle. 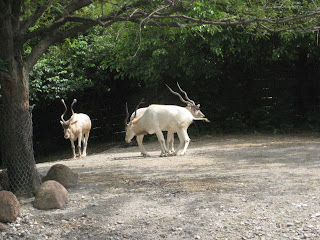 By the time I walked around the whole zoo, I was getting pretty tired, but the St. Louis Art Museum was a short walk up a big grassy hill. 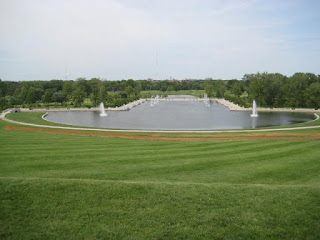 I quickly found what I was looking for...one room contained a large Monet mural of water lilies 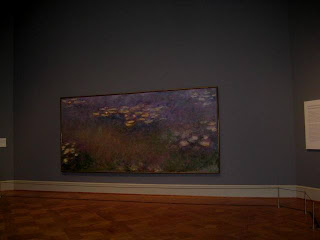 and keeping it company were my favorite piece of the museum, this Van Gogh painting 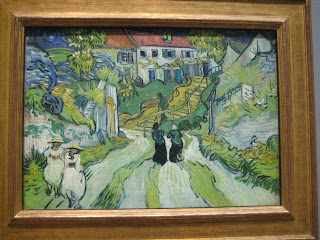 and a Renoir portrait 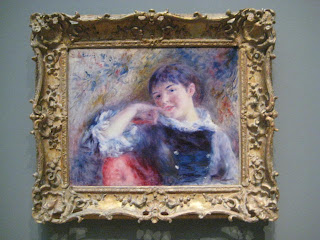 not to mention a Cezanne, Degas, and Gauguin.  Great stuff!
When I found my way back to the motel, Charlie left a message that I should take a cab and meet him at a restaurant where the company took them to dinner.  So, in one day, I managed to ride subway, city bus, and cab by myself and not get lost.  This is really good for me, who does not possess a sense of direction.  The rain finally came down hard while we were at the restaurant.  In my next post I will show my wanderings around downtown St. Louis and the great public parks and sculpture gardens there.
Posted by Jeanne Turner McBrayer at 3:20 PM