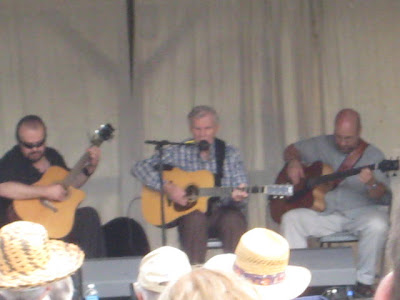 No, not the movie...the musician! Charlie and I were fortunate to attend an outdoor music festival in the North Carolina mountains last weekend, which was capped by a performance by Doc Watson, a singer and guitar picker who is an icon in the field of bluegrass mountain music. Doc is from Ashe County, North Carolina, which is where our little mountain cabin in Laurel Springs is located. We actually saw him perform once before right in Laurel Springs, at a Saturday night dance at the old "school house." He played square-dance type music with no accompaniment. We were the only ones there not wearing taps on our shoes for "flat-footin" or clogging! I still wish I had saved the sign at the admission table. Usually the price to get in is two dollars. There was a hand-printed sign by the money box that read "Four dollar tonite cuz Doc are hear."

At this weekend's festival, Doc performed with his grandson Richard Watson, a fine keyboard artist named Jeff Little from Boone, NC (home of my father and two of my brothers) and two other guitar players. The music was diverse: not all bluegrass. There was a little bit of blues, a little bit of swing, and some old favorites. Doc is charming, telling stories and talking to the other musicians between numbers. He is most famous for picking the guitar like a fiddle, and singing with his beautiful sweet voice. He has won a number of Grammies for his recordings. Oh yes, and performed in Carnegie Hall and all over the world. And in the little school house in Laurel Springs.

Did I mention that Doc Watson is in his eighties? Oh, yes, and he has been blind since childhood?

Doc said that he had been sick for several months: "too sick to pick." If you are Doc Watson, that must have been a deathly illness. We are so happy that his health has improved and he could perform last weekend.

They did not perform one of my favorite Doc Watson songs on Saturday. Here is Doc, many years ago, performing with his son Merle (second from left) who tragically was killed in a tractor accident on his farm. Doc, thank you for the music! May you still be pickin' for many more years.


More about our mountain weekend in our next post.
Posted by Jeanne Turner McBrayer at 8:12 AM

OMG, what a great time! I really enjoy bluegrass music and would have moved to have been there!