Yesterday I trimmed Debbie's butterflies quilt- losing some of the quilting in the process. The floral fabric used by her grandmother for the sashing is a rather loosely woven cotton that has frayed badly at the edges over the forty years or so since she started this project. I had to trim a quarter to a half inch off the edge to get to the intact border fabric. One strip had frayed at least an inch, so I made an applique "band-aid" from a strip of folded muslin. Then I did a very tight stitch around the whole outer edge to keep "our" quilting stitches from unsewing themselves. 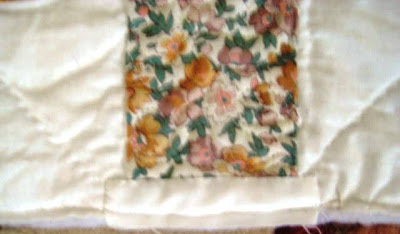 I went up to my sewing room to audition binding fabrics. I liked both a sage green and a rich brown that matches the butterfly torsos, but don't have enough of either. Getting ready to go shopping! Always a good thing.
Here is a heart-warming note from my sister-in-law Debbie: "When I see (my quilt), I'm reminded of pajamas, dresses, shirts and stuff my Grandma used to sew for us. She always saved every scrap and used them in her quilts.I like the idea of "kisses from Grandma" too." This is what it's all about!

I also rummaged around and found a perfect already-made hanging sleeve for niece Amy's butterfly quilt. I had made a white-on-white sleeve to hang one of my quilts in a show, and then took it off later. Last night I got the top half of it sewn on while we watched an old movie on TV called Bridge to the Sun, about an American woman married to a Japanese man who was deported with him to Japan at the outbreak of the war. Quite a good flick.

Unfortunately, my sewing room is such a wreck that I spent at least two hours putting things away so I could find my cutting table. (LOL) I started a studio transformation last February that got stalled when I went back to work teaching school from February to June. I need to get rid of lots of stuff that I don't use or need. Yesterday I went through ONE of my scrap drawers and cut triangles and squares for scrap quilts. These were just the dark blue ones. I actually threw out a LOT of little scrap pieces. Now on to the rest of the color wheel. This could take awhile!
Posted by Jeanne Turner McBrayer at 8:59 AM

Isn't it nice when the whole room is clean and you get to start fresh. Sabrina and I stay up late on Friday nights sometimes to clean up our little studio - mop the floor, dust, re-fold and replace everything left out all week. And then early Saturday morning we meet in there before everyone gets up and Sabrina will close her eyes, and stand in the middle of the room say to me, "Momma - can you feel the chai in the air???? And then we'll get to work and mess it up all over again!!