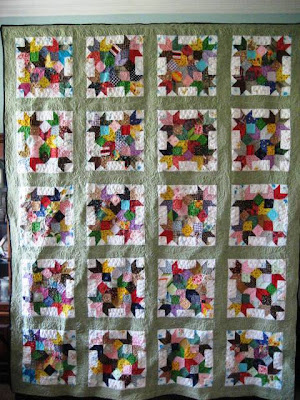 Yesterday we drove my father to my niece's house in Durham, NC, to meet up with my brother for the drive back to Boone. My niece and her family live in a former boarding house in an older section of Durham. It was originally from 1926, with a new wing added a few decades later. It has eleven bedrooms, most of which have been converted to office space, exercise room, and toddler play areas. Anyway, while on the tour, I saw this scrappy star quilt that I finished for my sister-in-law. It was hanging in an upstairs hallway, and looked great. Debbie had brought me three quilt tops that her grandmother had started back in the 70's or earlier. This was one of them that she had given to her daughter Amy. This one had very poor piecing (done in Grandma's later years) and took a lot of quilting to get it to lay flat. 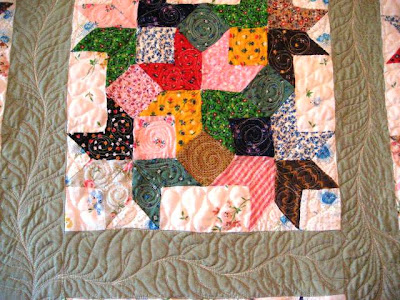 Then, Amy showed me another quilt she inherited that was in a plastic bag waiting to be hung. 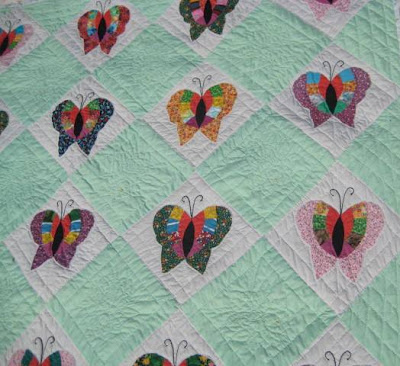 This one was finished, but had no hanging sleeve. Since she has two babies and no sewing machine, I brought it home with me to add a sleeve. It smelled musty and moth-bally, so it is airing out on the lawn between two freshly laundered sheets. This one has very graphically pleasing bright butterflies on a white and mint green background. Check out the calico and some wild old prints. 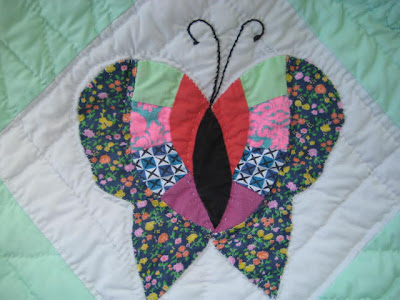 The butterflies have blanket-stitch around the edges, and black stem stitch antennae. Here and there are little embroidered yellow circles. 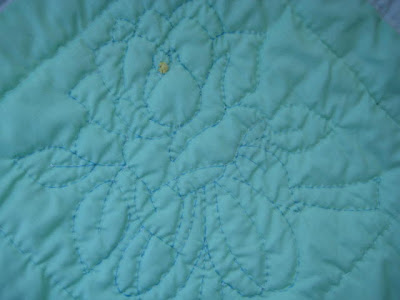 Upon closer inspection of the hand quilting, I thought at first that she used variegated thread. Then, I realized that she used white thread, but never removed the blue markings from the quilting motif.

It is nice that Debbie and her family value her grandmother's creations. I have one more to do for her that is partially quilted by hand. I think I am going to attempt it on the Gammill and pray to St. Quilta the Comforter to make it smooth and pucker-free. Debbie says there are many more still back in Indiana, sitting in bags and waiting to be quilted. I told her to bring 'em on!

While I was outside to air the quilt, I noticed a lot of activity on my giant lavender plant near my garden pond. If anyone is wondering where the honeybees have gone, they are in my yard! Some of these little guys had so much pollen in their pouches, I don't see how they can fly. Notice the huge yellow spot on the leg. 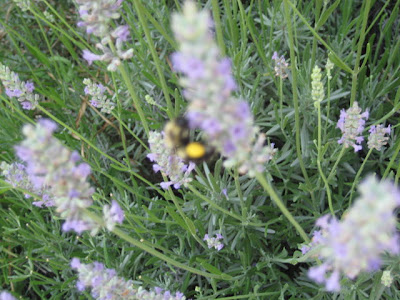 And here are some Shasta daisies that decided to bloom while I was on vacation. 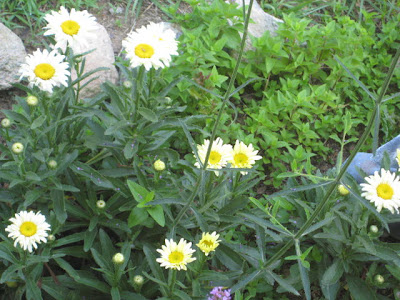 Posted by Jeanne Turner McBrayer at 9:34 AM