Here is the continuation of my blog about our Chicago trip.  We stayed in a hotel on Michigan Avenue and were able to walk everywhere we went.  I very much admired the garden plantings on both sides of the street.  Most were either raised on concrete platforms, or had low wrought iron fences surrounding them to deter doggies. 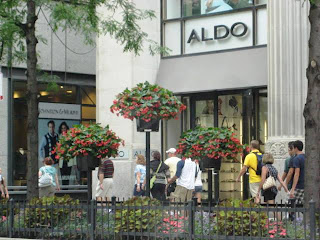 After I returned from the boat tour of the river and lake, I walked down to Millennium Park and the Chicago Institute of Art.  It was really getting hot by then.
You can see the back of the Cloud Arch, better known as The Bean, from the street, so I clambered up to it. 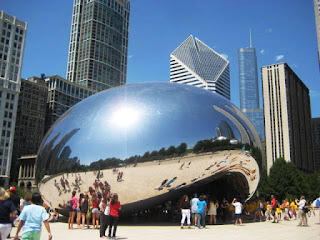 It has mirrored surfaces, which many people used to photograph themselves.  Me, too! 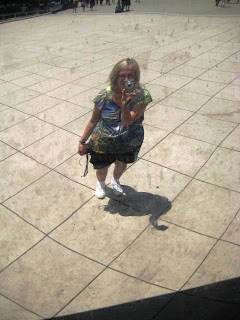 Inside of the arch, there are lovely swirly distortions of light. 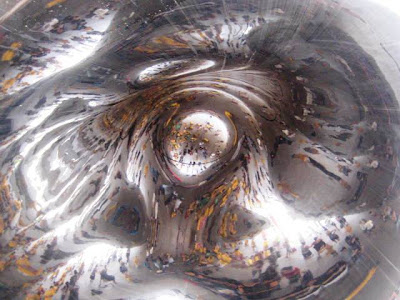 Then I went looking for the Crown Fountains by Jaime Plensa of Spain.  At first glance, these two rectangular brick structures did not look too impressive.  But the sides that face each other each have projections of faces of Chicago citizens.  The water cascades over the top and on different sides of the structures, sometimes coming out of a fountain where the projected mouth is located. 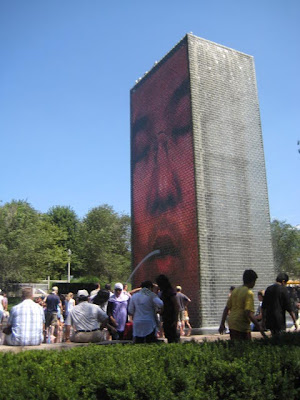 On that very hot afternoon, the fountains served as a type of public pool.  Very popular! 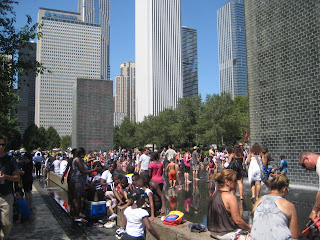 Then it was on to the Institute of Art. 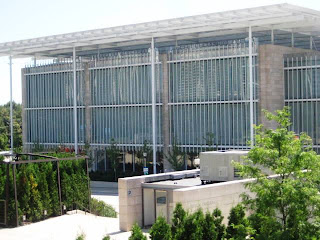 Unlike the North Carolina and Saint Louis art museums, this one had an admission fee of $18.00.  However, their funds are well-spent on acquisitions, because I was blown away by the number of Picassos, Monets, Renoirs, Cezannes, and Matisses in the collections.  Having seen the Monet in Normandy exhibit, I was surprised to see this painting which is not of sunny France, but cold snowy Norway.  (Sorry that my small camera does not illuminate the paintings sufficiently...you can look them up to see better quality pictures. 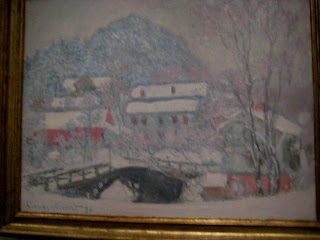 Claude Monet, Sandvika, Norway, 1895.
One of the most famous paintings here is A Sunday Afternoon on the Island of La Grande Jatte by Georges Seurat.  I know you've seen this one.  It shows up frequently as a Jeopardy question, and is probably included as one of the wallpapers provided on your iPhone.   I had no idea it was so huge! It measures approximately 6 ft 10 in x 10 ft 1 in. 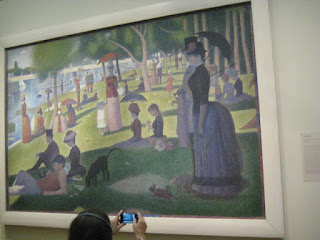 It has a wall all to itself.  You can see a person reaching up to photograph it.
I always kind of thought that the people in this scene looked kind of like cardboard cutouts that could be moved around.  It is always good to see paintings in person and see the details.  The most amazing thing is that this enormous scene is composed of dots of paint in the Pointillist style.
Looks like my old dog Maggy was there! 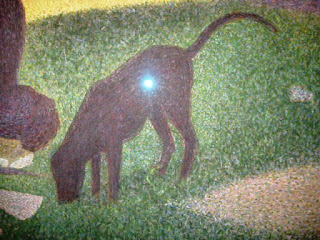 I thought this was one of the most interesting paintings that I saw in the museum.
Posted by Jeanne Turner McBrayer at 4:54 PM