Christmas Ornaments from Here and There

Every year, when I get out boxes of Christmas ornaments and decorations, I remember not only Christmases past, but places we have visited. Many years ago, I started looking for Christmas ornaments when we traveled out of town. This was not always easy, since school teacher vacations were mostly during the summer months. I thought you might enjoy seeing some of the ornaments which bring back fond memories of our trips.
Way back in the 1970's, Charlie played trombone in The Little German Band. (It's not little...there were over forty members!) They performed on weekends at Oktoberfests, and often at the N.C. State University Faculty Club. In the summer of 1976, they arranged a tour of Germany and Austria, and we both worked two jobs to save up extra money for the trip. (I worked eight hours a day for the state Disability Determination Section, and at night as a waitress at an Italian restaurant!) That was our last trip to Europe. We found it very romantic...I came home with a little stow-away on board! We named him Bryson, but the German Band members called him Little "Helmut." Anyway, even though the trip was in July, I bought some wax Christmas ornaments. Two have melted after being stored in the attic, but I still love these two survivors. I guess they are made from molds, and then hand-painted. 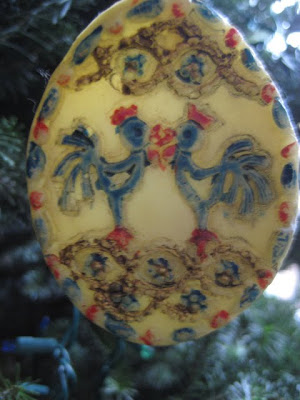 It is hard to take photographs of ornaments on the tree...they tend to jiggle around! 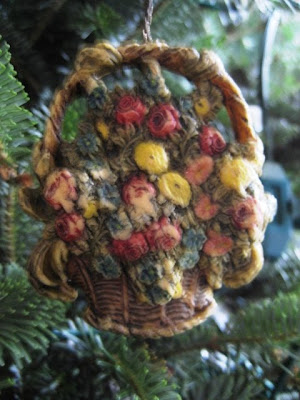 When Bryson was about six months old, we went to visit college friends who lived near Charleston, S.C. They now live only about thirty minutes away from our mountain cabin, so we see them much more often. I remember Vicky and I pushing our babies in strollers along the waterfront and through the markets in Charleston. This is one of the ornaments I remember purchasing there... a little toy horse for my little boy. 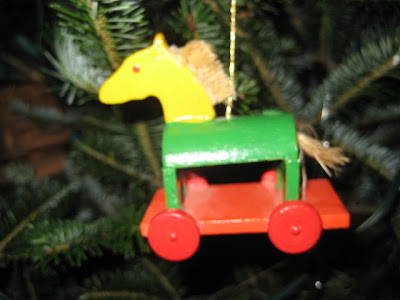 When I get a new Christmas ornament, I try to remember to write the year on the back with a white or gold pen. I am so glad that I have done that, now that we have been married for 38 years. It is getting harder to remember things!
Fast forward quite a few years...I must not have traveled much once we had two babies and very little money for quite a long time! Most of our ornaments from those wonderful years were the children's school projects made from jar lids and dried pasta! I treasure them, too, although I have bequeathed most of them to the boys for their own Christmas trees. Charlie eventually changed careers from being a university business office employee on a fixed salary, to becoming a successful financial advisor. I accompanied him on many nice business trips across the country. One of my favorite destinations was San Francisco... 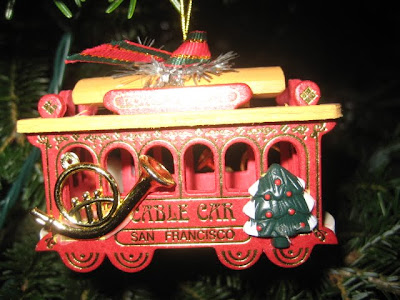 and each time we went there, we visited Muir Woods to see the redwoods. 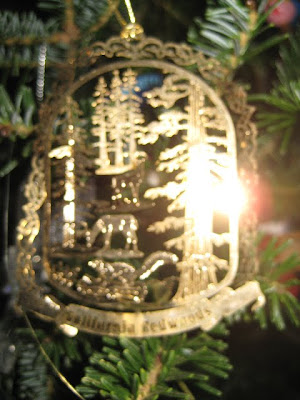 And I found this jolly California Santa in a gift shop in Sausalito, where we stopped on the way back from Muir Woods and the wine country. 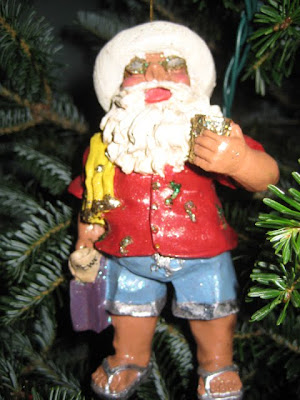 We have also been to Boston twice. The first time, it was the 200th anniversary of the U.S.S. Constitution, a ship nicknamed "Old Ironsides." The spouses were treated to one of those bus tours where you can get on and off to visit places sites of interest, and I very much enjoyed seeing this old battle ship that was named by our first president, George Washington. 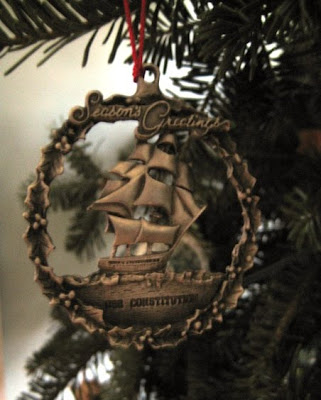 When Charlie first became a stock broker, he trained in New York City for three weeks, his first trip to the Big Apple. The boys and I could not afford to visit him then! I actually was born and lived in the New York vicinity for my first fifteen years, but had not been back to visit since 1966. I finally got to revisit my "home town" a few times within the last ten or twelve years. 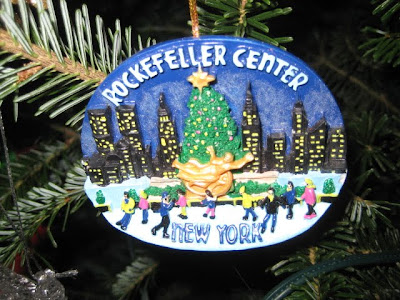 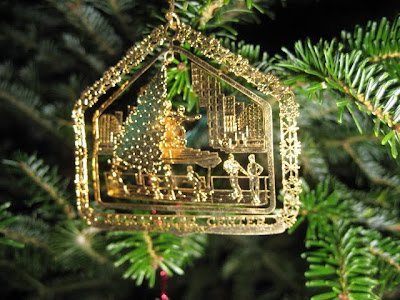 One place I had never been was New Orleans, Louisiana. July is not the best month to be in the Deep South...but I found this jolly Santa, possibly mixing up some beignets, who adorns my pantry door. Does he look a little like Paul Prudhomme? I think so! 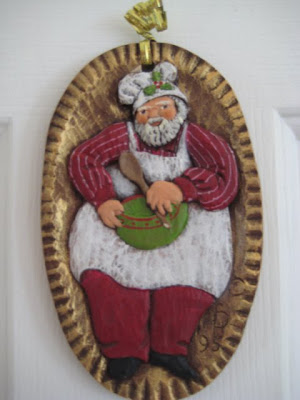 But our best trip EVER, which was a reward for a wonderful sales year, back in the LAST wonderful sales year, was in June of 2001, when we had an all-expenses-paid trip to the Atlantis in Nassau, Bahamas. The Atlantis is such a huge resort that you could probably spend a week there and not see everything. They have plentiful gift shops there, if you feel like dropping $99 on a piece of Lalique crystal about an inch square. While Charlie was attending the obligatory business meetings, I decided to visit the craft center across the street, where locals sold their hand-made items, and they actually expect some haggling. I spent less than five bucks, and came home with two authentic island ornaments. The first is this smiling island lady...can you see the hand stitches on her shoulder seam? 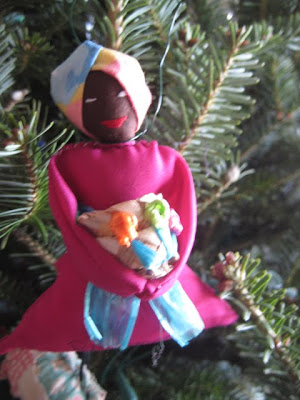 And this jolly island Santa, complete with straw hat, who has the fluffiest cotton beard in the world! 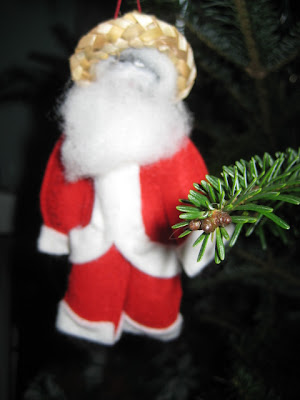 I hope you have enjoyed reminiscing with me! Now it is off to finish the giant customer quilt that I have been "wrassling" with on the Gammill!
Posted by Jeanne Turner McBrayer at 10:42 AM

Anonymous said...
This comment has been removed by a blog administrator.
December 7, 2009 at 9:23 PM