"I am thankful for..." Fabric Postcards

My goals for Monday changed when I realized that I needed to send in my postcards for soldiers in Iraq. One of the ladies in the Carolina Longarm Association wants to send enough postcards for every soldier in her husband's troop, and she asked to have them by Thanksgiving. Okay, that meant mailing them today. And it ties in perfectly with Vicki Welsh's November Postcard Challenge, "I am thankful for..."
So, up to the wreck of a sewing room, searching madly for relocated things, pulling stuff out, trying out my new set-up. I already dislike several things about the new room, but was able to get a few cards done.
I am thankful for our service men and women who are doing a valiant job far from home under sometimes terrible conditions.
Three cards are based loosely on the American flag, but with a field of white snowflakes on blue instead of stars. I used a piece of striped satiny-type uphostery fabric for the red and white part of the flag. They are each a little different.
The first one features lots of zigzag stitching in white and red thread over the stripes, and a luscious blue yarn around the border. 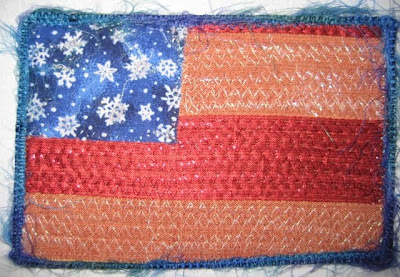 The next one has rickrack to make more stripes in the red area. I just zigzagged the outer border with red metallic thread. 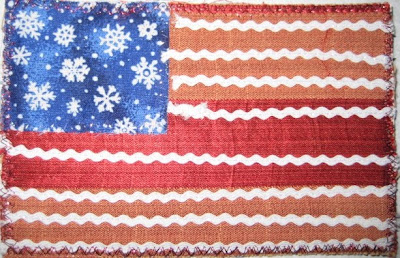 The third one is a little more "artsy." I added a star cut from Angelina to the blue area, red silk ribbons on the dark red stripes, snowflake buttons, covered the whole thing with gold-dot white tulle, and then zapped with my heat gun. Here is a tip: don't put the buttons so close to the edge that you have to zig-zag! Or put the buttons on last! 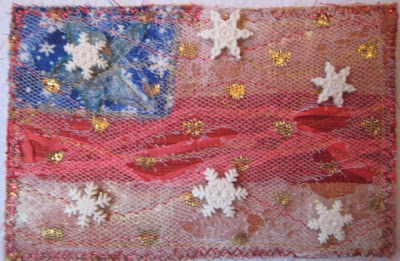 I also finished a little winter scene that features a fabric pine tree, a batting snowman, and silvery snowflake stitching. For fun, I added some button mittens and snowflakes. Same comment about the buttons being too close to the edging. I used tiny black pompoms for the snowman's face. I sprayed the whole thing with crystalline glitter mist, a new product I had not used before. 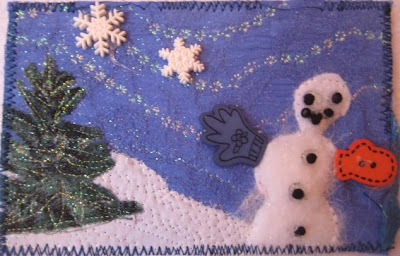 And finally, because this one looks like a wintry mountain scene, I sent one of my postcards from the October postcard challenge. (Vicki, don't count this one again.) 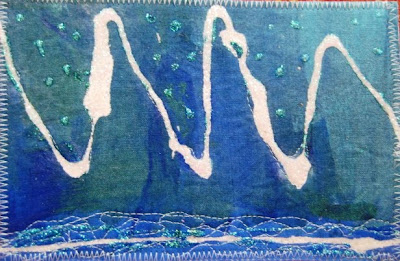 I hope these cards might bring a little joy to a soldier far from home during the holidays.