Confessions of an Inadequate Quilter 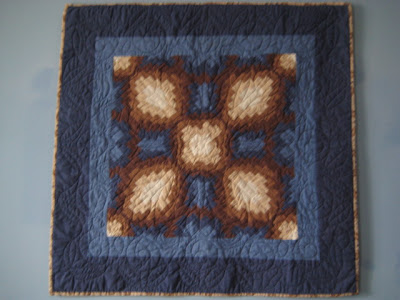 Just received an announcement from the Capital Quilters Guild of Raleigh that it is time to sign up for the spring workshops, including the first one with South Carolina quilter Jennifer Amor.
Wow, that brought back some memories for me! When I first joined the guild back in the late eighties, I was a traditional quilter, self-taught from the one library book I could find about quilting. I did my piecing by machine, but mostly used templates and scissors to cut out my patchwork.
So, I decided to try some new techniques, and signed up for a Bargello class with Jennifer Amor.
Our guild meets on Thursday nights, and if we have a guest lecturer, they usually teach all-day workshops on Friday and Saturday.
I have to say that I nearly did not make it to the workshop, because I almost died laughing during the guild meeting! At the time, Jennifer was into that black-and-white cow phase, and showed us all the cow decor she had collected and made. At the end, she lifted her skirt to show us cow bloomers with udders. The whole room was screaming with hilarious laughter.
And then came the workshop. I think I must have attended the Saturday class since I was teaching full time back then. I had gotten my list of supplies and fabrics. We were to purchase a light, medium, and dark shade of two different colors. So, I took myself to the Remnant Shop and bought blues and browns. The only reason I can explain that choice is that I had not yet discovered color. And I had a navy and brown plaid couch that needed something to hang on the wall above it!
My sewing machine was a Singer zig-zag that I purchased as a newlywed in 1971 along with its fold-up wooden cabinet. My husband got it out of the cabinet for me so I could bring it to the workshop. No carry case, so I think I wrapped a towel around it and schlepped it along with me. This bad boy cost about $150 back then, but I think I probably paid double that because I paid on credit at about $7.00 per month!
As for notions, we were to bring a rotary cutter and ruler. If we knew how to cut strips, we were to cut strips ahead of time in the varied widths instructed. I did not know how to fold the fabric or use these hot new tools, so I arrived with just my yardage of fabric. And watched everyone else get out their pre-cut fabric strips and start sewing away on their strip sets.
So, thankfully, in comes our past president, the one and only Jane Hall, co-author of the foundation pieced quilting books and quilter extraordinaire. I think she and Jennifer were buddies on the quilting circuit. Jane saw me not knowing what to do and personally taught me to use the rotary cutter. BUT- first she had to borrow someone else's ruler for me. I had bought some little plastic ruler deal that was not intended for rotary cutting.
So I get my strips cut out, finally, and get ready to start piecing them together. And in its first move ever out of its sewing cabinet, my little cheapo Singer lost its tension setting. My strip sets were falling apart! By this time I was getting pretty flustered, or should I say tense! But I adjusted machine tension for about twenty minutes and finally got going.
So as I am sewing together my ugly brown and blue solid fabric, I look around the room at all the lush combinations of fuchsia and teal, coral and turquoise, rose and purple, and wondering why I didn't pick something a little less mundane.
But, although I still recall these events after twenty years, I remember that workshop fondly because 1. I met Jane Hall; 2. Jennifer was still making me laugh throughout the workshop, and 3. I actually finished this project. No, not in time to hang it over said navy and brown couch.
When it came time to machine quilt, my little clunker was having a very hard time making it over all the many seams on this quilt. I was using invisible thread, but I think it was the old kind that is like fishing line, and it broke constantly.
In making this quilt, you end up with four identical blocks of offset strip sets. You can turn them different ways to see which setting is the most pleasing to the eye. I thought mine ended up looking like flowers. 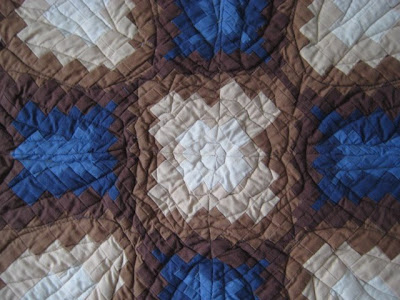 Now, I had not done any machine quilting before, but I thought it would be nice to machine quilt some flowers in the borders and spaces. So, I made up a flower design. Now, how to draw it on the quilt top? Pencil just did not show up. I ended up marking my design with blond eyebrow pencil! Went on easily, showed up great! 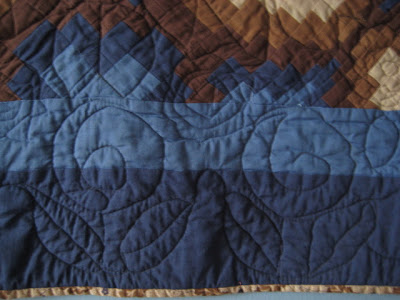 I did not get this finished until years later when I bought a better sewing machine. It never made it over the old couch, but right now it is hanging in my pale blue dining room.
When I think back on this early experience, I realize what a long path I have traveled since not owning a quilt book, proper ruler, a decent sewing machine, or having a stash of beautiful fabric. I guess we all had to start somewhere!
And I can't wait to see Jennifer Amor again. She is still teaching a four-block Bargello workshop, but I believe she uses a foundation piecing method now. And I no longer see any Holsteins on her web site, but could it be that she is now flaunting flamingoes?
Posted by Jeanne Turner McBrayer at 9:38 AM

Loved the story, Jeanne. Don't you suppose everyone has a similar "skeleton" in their sewing closet? I sure have a lot of UFOs in mine...of all types. You've sure come a long way, from a little machine to a Gamill, WOW! And I can see a definite change in your color preferences, too.....

What a great story! Quilting is a journey and we all start somewhere!

Vicki is so right -quilting IS a journey, and usually if we sign up - it's for LIFE. You Jeanne have come so far - what a wonderful story that was and, yeah - I even like the blue brown and white quilt!!

Jeanne, what a great memory! Reading your story reminded me of my own beginning quilting... which did not turn out as well as your bargello! Isn't it amazing that the brown/blue color combo is now so hot again?!! Thanks for the story.