Lots to catch up on

Here is what I have done in the last week.  First, on Wednesday I received a remarkable package in the mail...my long-awaited blog give-away prize that I won from Carla Barrett back in January.  It is a fabulous, free-form crochet beaded necklace in the colors that I chose...created just for me!  Carla named it "Waves of Color." 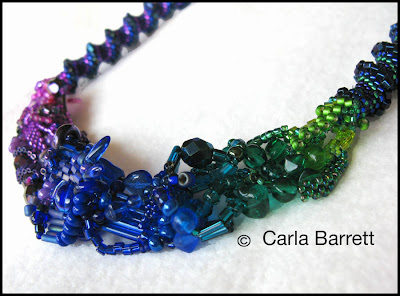 I can't believe it is mine!  All I had to do was follow the instructions for the give-away, which was to publicize Carla's online Quilt Whisperer  workshop.  Wow...I am so lucky!   On Thursday, I proudly wore my new necklace when we went out to eat at Bocci's in Cary with Dave and Emily to celebrate his birthday. 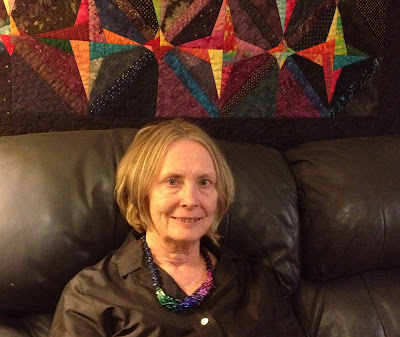 I finished painting my old sewing room upstairs last week.  What a difference!  It is not all put back together yet.  Today I painted the walls in the hallway between the two rooms on the third floor.  It is kind of rare to have a house with a finished attic space, so I want it to look bright and new.

Last weekend we headed for the mountains for another mini-reunion with my family.  My brother Jeff lives in Florida, so we don't get to see him too often.  He and his wife and daughter drove up for a week in the cooler climate of the North Carolina mountains.  We had a nice al fresco dinner at the shelter in what we laughingly call the "City Park."   My brother John came over from Boone to join us.  Here are two of my five brothers together. 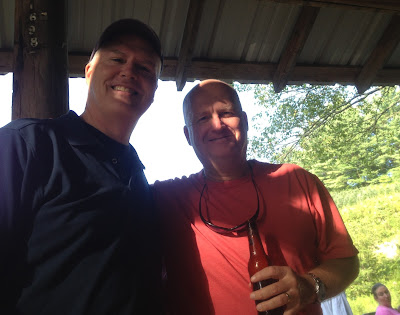 The weather was very nice, and we had lots of fun sitting at the creek and riding across the mountain trails.  At the Christmas tree farm on top of the mountain, they are replacing the cut trees with pumpkins.  I wonder if Christmas tree farming is not as profitable as it once was.  It takes at least seven years to grow a six- or seven-foot tree from a seedling. 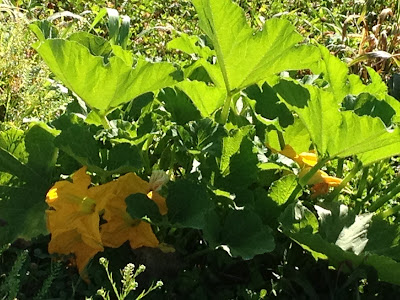 That's not a big orange pumpkin near the back...that's my dog, Kasey! 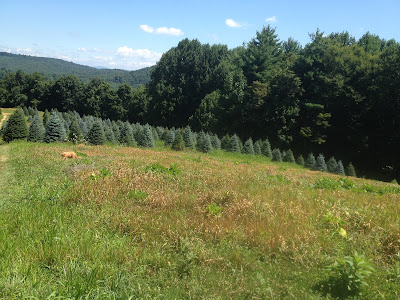 We went on a long ride on Sunday afternoon.  We stopped to view the progress of  the reclaimed "sulphur flats" which had been polluted by the former copper mine on top of the mountain.  It had been covered with dusty sulfurous powder that ran off into the creek.  Nothing would grow on the land or in the creek in that area.  Now it has been covered with layers of soil and rocks to filter the polluted water.  It is looking great...your US tax dollars at work! 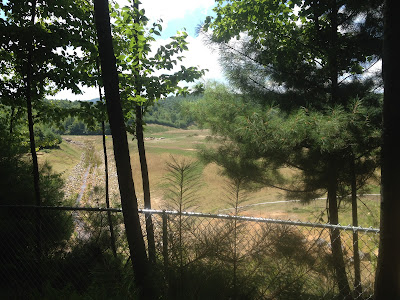 I caught this picture of Charlie and Kasey standing in a pool of light overlooking the sulfur flats.  A beautiful spot in the woods! 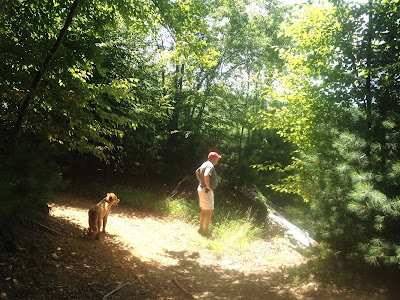 Last week I mentioned some mysterious boxes that had been lurking in an attic space for the past 18 years.  The contents of the second box were a collection of my old formal dresses!

This one (sadly wrinkled) was my Junior prom dress, circa 1967.  I thought it was a rather tasteful linen sheath for the times. 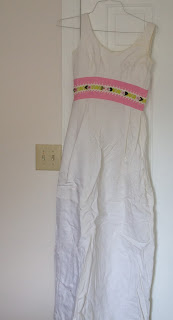 The next one was my bridesmaid dress from my friend Barbara's wedding.  A big fluffy yellow thing! 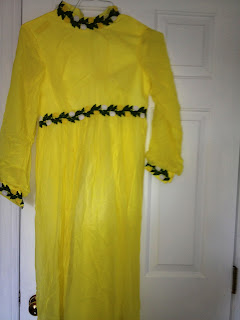 Here we are way back in 1970.  That dress did not look so bad.  We were pretty cute back then! 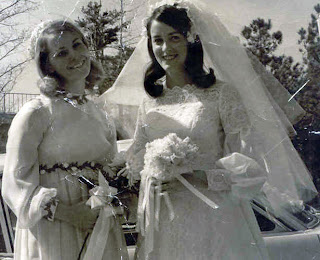 Feel like you're in a Katherine Heigl movie yet?  Here's another bridesmaid dress.  I actually liked this one from Donna and Bobby Harley's wedding in 1973.  Less frothy!  It is still in great condition, although a little out of shape from being in the carton so long. 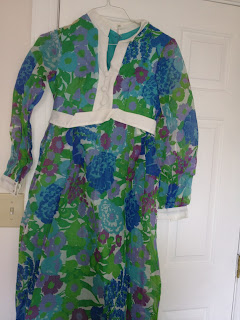 This dress was not a bridesmaid dress, but I wore it in the seventies when the maxi dress was in style.  It is a knit that has held up beautifully...if you dig those bright colored flowers on the gray background! 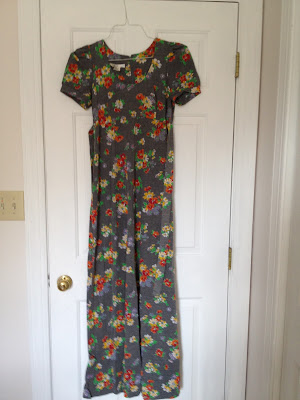 And the piece de resistance...my own wedding dress!  Back in the Seventies, brides were not wearing those low-necked, sleeveless gowns that are so popular now.  We were modestly decked-out like fairy-tale princesses...or Juliet!  Actually, much more flattering on most figures, especially on today's brides with their tatoos peeking out from their formal gowns! 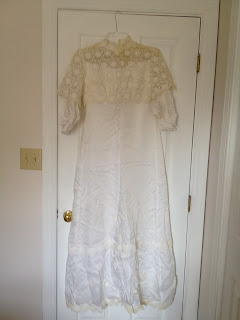 The Venetian lace has gotten a little yellowed, but the dress is otherwise in great condition considering it was never packed for posterity by the dry cleaners.  Here is my tiara and floor-length tulle veil. 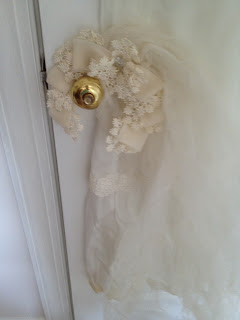 Hope you enjoyed this trip down Memory Lane!  I think these dresses are going to kept for my granddaughters to play dress-up.  Might as well, since I've kept them this long!

Glad you enjoyed the mountains...rained here every afternoon. Uh..i think i wore the same dress you had for Barbara's wedding. It was actually my favorite bridesmaid dress. Ism't it a hoot to see that stuff again?