I have been quilting, quilting, the last two days. The title of this post explains part of the reason that I have almost finished three quilts in three days. More about the reason for therapy after the quilting part.

I finished my friend Karen's T-shirt quilt that will be a gift for her husband. I would name this quilt, "Labor of Love," if it were mine. Imagine working hard in the construction industry all year, getting a couple weeks off, and spending part of it sleeping on church floors and pews while fixing houses in poverty- or disaster-stricken areas. I admire the folks who can do this. The t-shirts in this quilts are all from various Reach construction missions over the years. 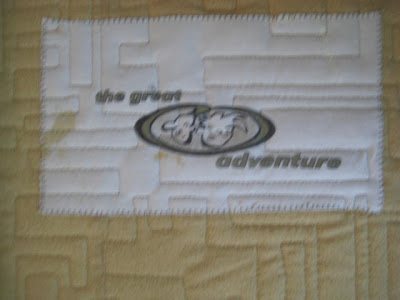 Can you tell these are authentic souvenirs of a construction project? There are little traces of paint, stain, grout, whatever, on many of the shirts.
I decided to do a right-angle meander, which is new for me. I thought the linear design mimics the skyline of the cities on some of the shirts, and also brings to mind boards and schematic drawings. 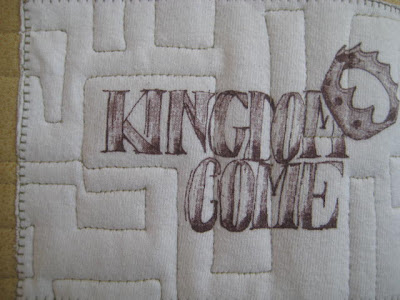 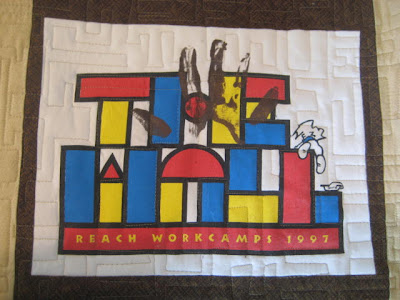 I have also added some basic tool outlines in the tan outer border between shirt designs. 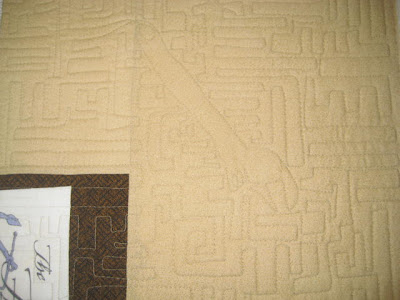 I'm afraid most of my tools look like they have been dropped from the scaffold and bounced on the concrete, but I think they will at least be recognizable.

The third of Karen's quilts is a pastel Take Five quilt in Wizard of Oz fabrics. Very fun and quite feminine after working in tans with carpenter's tools, LOL! This one is getting fantasy flowers worthy of the Land of Oz, and some starbursts and other fun designs. I only have one more pass to go, but just couldn't do any more today. 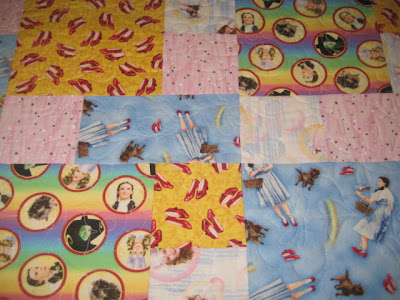 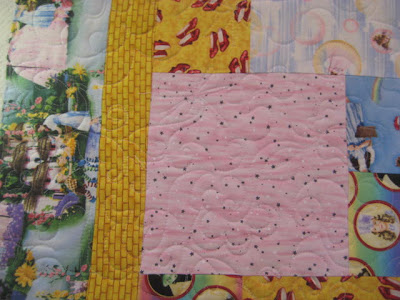 So, why call this frenzy of long-arm quilting "therapy?" Well, don't want to be a "whiner," but this has not been the best of weeks. The main reason is that Wall Street has reached Main Street at this address. Did I mention that my husband is a stockbroker? He and others had to watch the market collapse when it became obvious that the government economic package would not pass. Before the day was over, Wachovia Bank had been purchased so it would not fail. That hit a lot of the stockbrokers at Wachovia Securities very hard in the wallet. But they are not unemployed since the Securities is a separate entity.

So, he comes home Monday in a state of semi-shock, and due to our remodeling project, can't even crawl into the Man-Chair and watch his beloved TV or reach for one of his fourteen remotes. So we sat on the porch until sunset, and then watched Dancing with the Stars while we drank wine on the bed.

Yesterday, good progress was being made on the floors. Here is how it looked at about 2:30 when Scary Tattoo Guy called me downstairs. I thought it looked shiny and gorgeous. 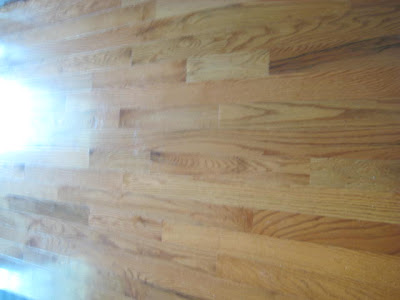 He announced he was stopping work because of a defective product, and was calling his supervisor to come out. Turns out the wood was not milled correctly, because there were gaps where it was supposed to join.

The supervisor agreed. I was now feeling doubly sick, and went back out to see about replacing the wood. I chose a different kind which is almost twice as expensive, hoping that it would be better. I don't know anything about construction and flooring. So confusing! It will be at least another week or two before we start up again.

Meantime, here is what the comfort of home looks like as my poor husband comes home from the trenches in this grim week of explaining to all his clients what is happening to their investments. 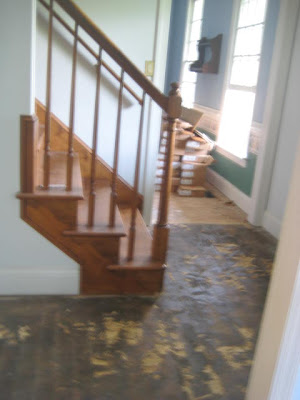 The front entrance with the most of the 31 cases of unused wood piled up in the dining room and the scuffed-up tar paper exposed. 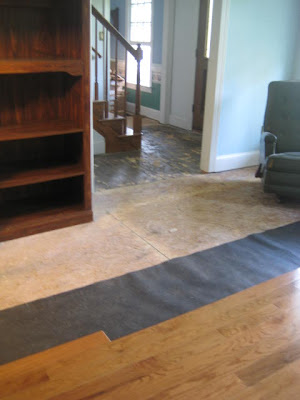 The floor that he laid is covering part of the living room, followed by new tar paper and plywood sub-floor. 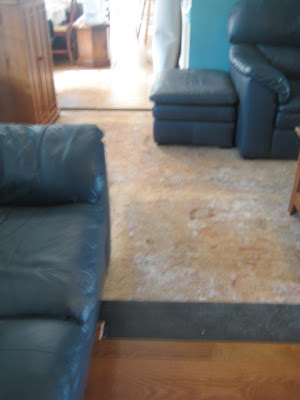 I know, at least I have a roof over my head, electricity, and no flood damage. And things will get done some day. In time for our client appreciation party on November 1? Looking doubtful!

Well, the sun has come out. Think it's time for me and Maggy to go exploring around the yard. A little nature therapy!

I'm sorry to hear about what your husband is going through. One of my friends works at WS in Norfolk. It's been quite an "adventure". Glad you have plenty of therapy!

I'm sure what your husband is feeling is very similar to what folks are feeling after Ike - we live in uncertain times and all need our therapy - I think quilting is one of the more productive types of therapy available don't you? Glad you had this escape today, hope it makes you stronger as you support your husband through the wild ride of wall street and our economy. Just remember, this too shall pass - hang on and be one of the survivors!