I could have titled this post the same as the last one, "Another Charity Quilt...and Another Win."  Unbelievably, I won another blog drawing, this time a Jelly roll of Moda's "Little Apples" by Aneela Hoey.  Thanks to Lindsey from Interweave, and to my friend Janice for alerting me to the win! 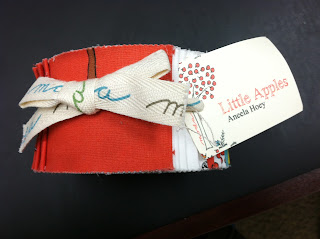 The next charity quilt is made from those raggedy circle blocks that were quite popular back in the 90's.  I had a book called Quilts From Aunt Amy that had the directions for this quilt with freehand-cut circles that are sewn a quarter-inch in from the edge.  The quilt is pictured on the cover of the book. 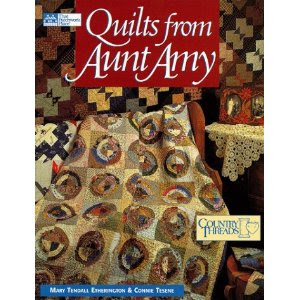 When the quilt is finished, you are supposed to wash it to let the raw edges fray and form a kind of textured ruffle.

I made a lot of the blocks using muted Civil War repo fabrics.  I decided to donate the blocks at our bee's sew-in last month, and Marilyn Featham stitched them into a quilt top.  I got it quilted yesterday. 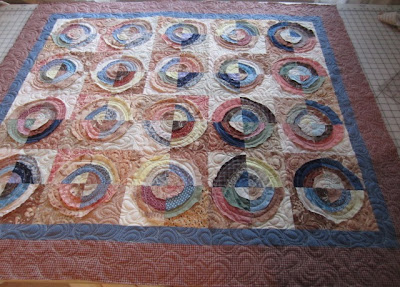 I did some bouncing curves around the whole thing until I got to the circles.  Then I just went round and round, spiraling in to the center and back out. 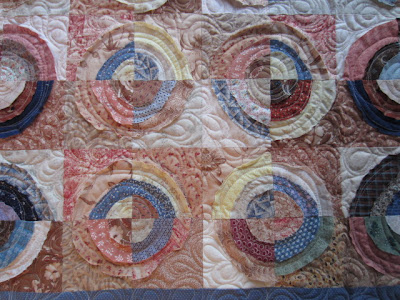 I had no idea this would look so nice when it was finished!  We had thought this would be for Quilts on Wheels, which is Capital Quilters' Guild's charity for rest home residents in wheelchairs.  But I am thinking now that it might sell well at the Heritage Days auction in the fall.  I will check with my bee and see what they think when we meet tomorrow night. 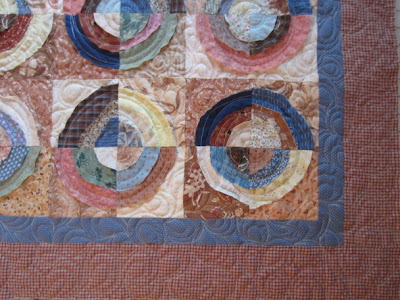 I found the perfect soft plaid flannel in our basket of donated fabrics.  It has cream, peachy pink and soft green plaid, and is so soft.  I had just barely enough to be able to pin it on the machine. 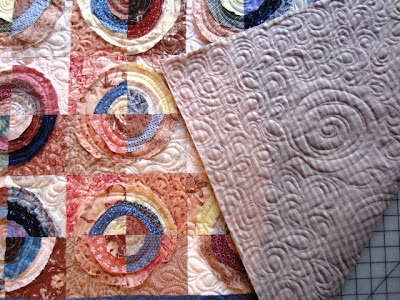 The quilting shows up nicely on the back. 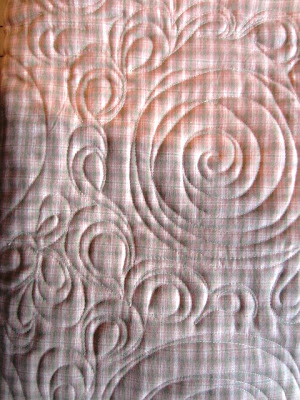 When I do charity quilts, I try to use up some of the bobbins that are leftover from other projects.  For this one, I used every shade of off-white that I had already wound, which included Linen, Parchment, Ivory, and Sand Dollar.  They all blended in just fine.  Between the three charity quilts I did this week, I freed up about twelve bobbins!  Yippee!

That reddish check fabric in the border of the quilt was left over from my granddaughter's nursery fabric.  She had a double- or queen-size bed in her room for company, and I made this quilt from the fabrics her mom had picked out plus some brighter pinks and greens.  I had some orphan blocks that I added in with the Yellow Brick Road blocks.  The center medallion is a Carolina Lily, which I just had to make since my granddaughter is Lily from South Carolina. 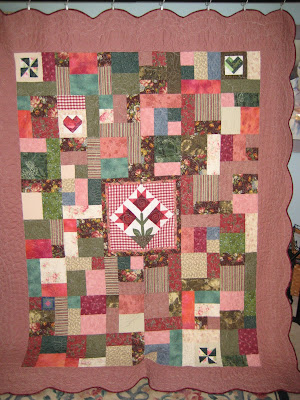 I actually scalloped the border, which made the quilt a bit more feminine. 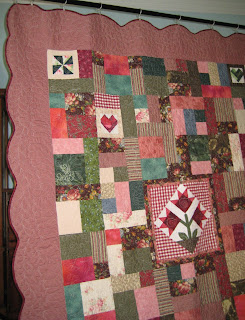 I had fun doing lots of pretty flowers, swirls and feathers in the quilting. 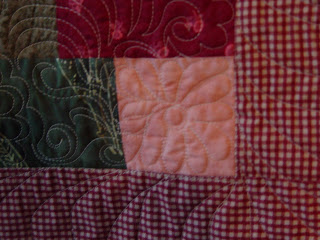 I also made her a wall-hanging using some of the same fabrics.   I designed the fancy letters, and used patterns from  Bugs, Blooms, and Bullfrogs by Pat Sloan for the flowers, dragonflies, and ladybugs. 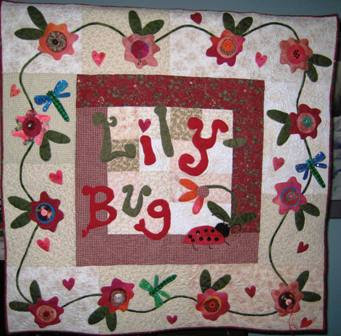 I added Swarovski hot-fix crystals, yo-yo's, buttons and beads to embellish the quilt.  The vine is one of those fusible bias strips you can purchase by Clover. I got mine at Mary Jo's Cloth Shop in Gastonia, NC. 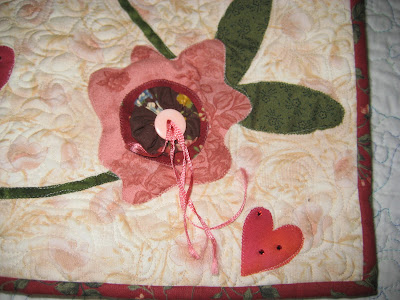 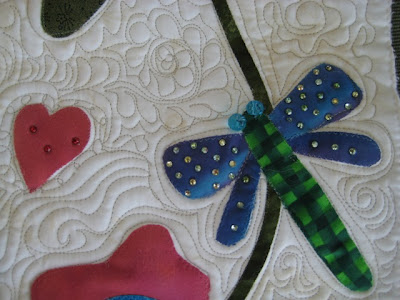 This was one of my favorite projects of all time.  I can't believe how fast the years have gone by.  Lily is now in Kindergarten and will be six in June.  But that big quilt I made for her ought to last her until college! 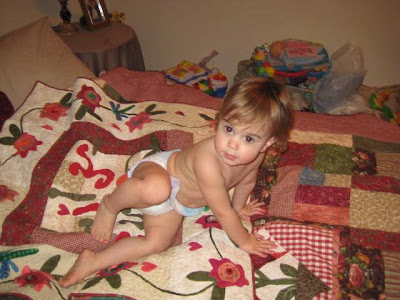 You can see why she got the nickname "Lilybug" from this picture I put on the label.  She had the biggest eyes on her tiny face! 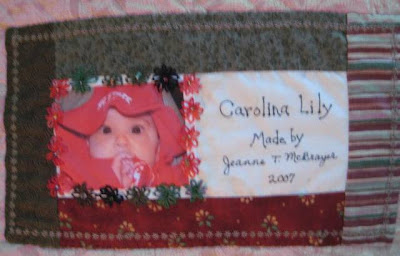 Your charity quilt turned out great! You have been really busy lately.

That would be a wonderful auction quilt! :-)