Here are some of the smaller bed quilts and wall-hangings from the show.

The Snowman Club, by Irene Bebber, was made from a kit. 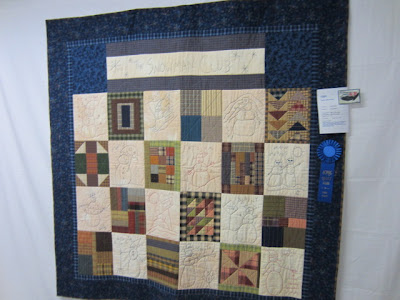 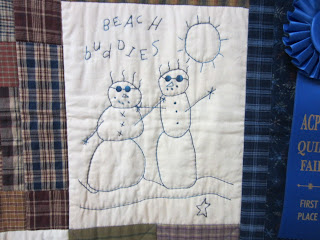 This is a nice example of bargello twist quilt- in my favorite color, no less!  All of the smaller quilts were pinned on hanging drapes, so this quilt looks more twisted than intended.  It is an Australian pattern made by Irene Bebber and titled Twisted Bargello. 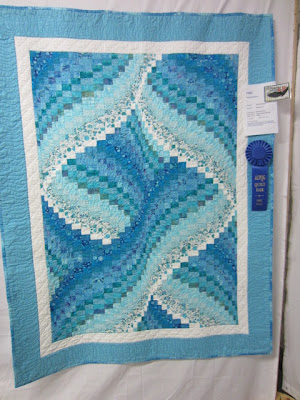 Here is a traditional quilt in cheerful fabrics.  It's A Grannie Thing is by Sandi Smith. 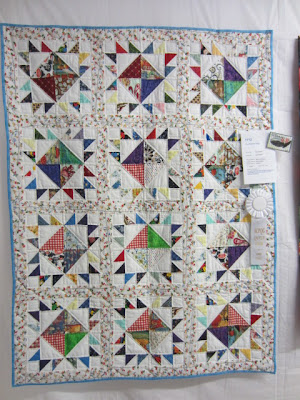 The next one is also very cheerful, made entirely of Fossil Fern fabrics.  Those have always been among my favorite fabrics.  I did not catch the quilt title, but it was made by Catherine Finch. 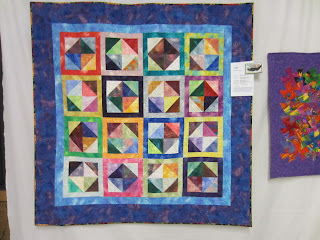 The lovely quilting is by Gillian Winterton of Laurel Springs Quilting. 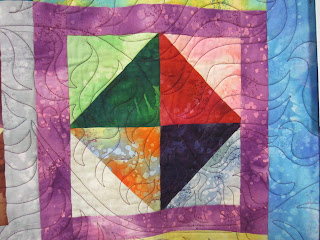 From the traditional to the unique:  Geisha in a Frame by David Smith. 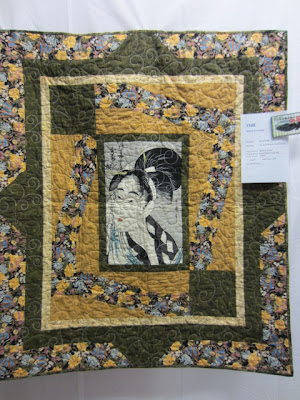 Love the colors in the next piece, also by David Smith, titled Stairwell Yen. 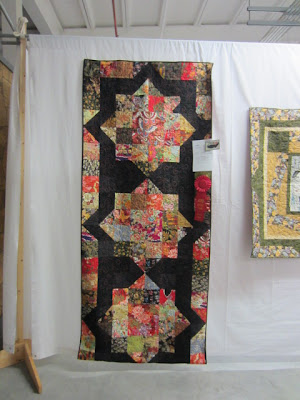 I have seen other quilts made like this 3-D pinwheel entitled Pinwheel Posies by Carol Skroch. 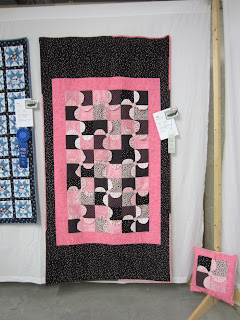 The blades or petals are gathered for a dimensional effect. 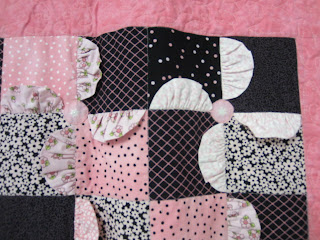 Here is a bright sampler by Lynda Harris entitled On the Road Home. 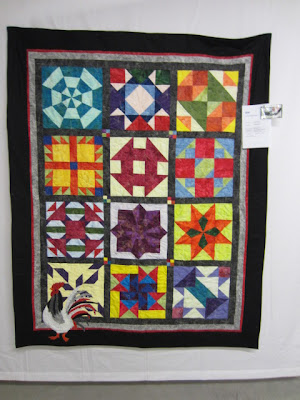 This strippy quilt in cool colors is called Bali Rainforest, by Sandy Leafe. 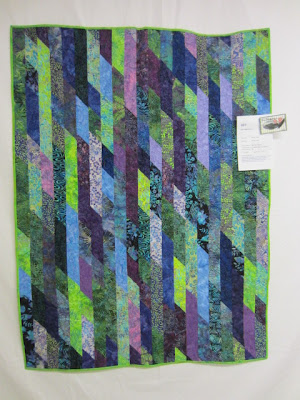 Here is a very cheerful child's quilt making good use of print fabric and stripes.  It is called Baby Genius Speaks Up by Jean F. Stevens. 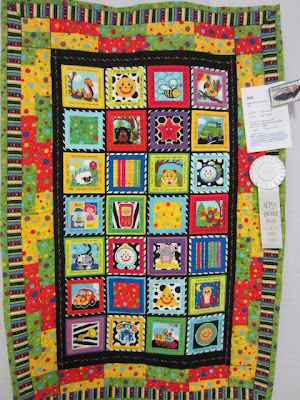 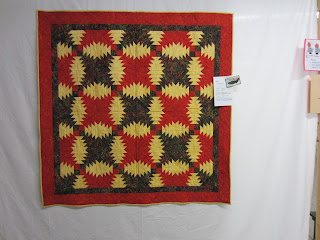 Here is a fabulous branchy tree made from a pattern, Threaded Timbers by Barbara Barkley. 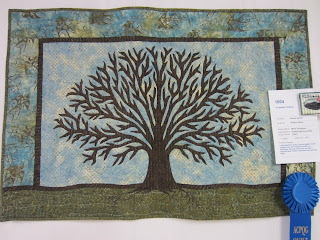 The next one was quite eye-catching:  Brown Crumbs by Elizabeth V. Kelbaugh.  The crumbs concept was learned from Bonnie Hunter, and the brown color scheme unites all the scraps and different blocks. 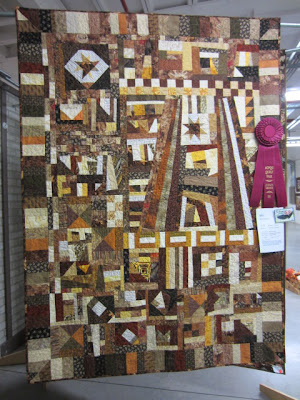 Here is a cute quilt in summery shades, Flip-Flop Fantasy by Wilma McClure. 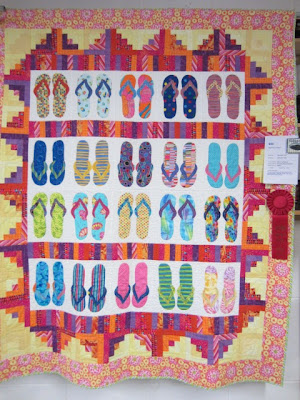 I adored the next quilt, Tuella's Day Out by Barbara Barkley.  It is made from a pattern. 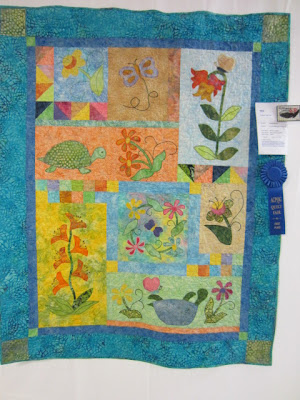 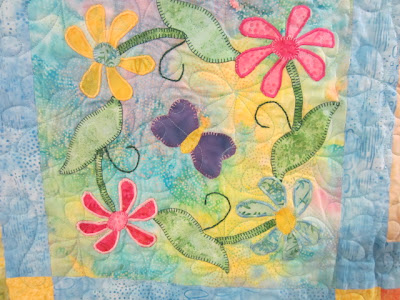 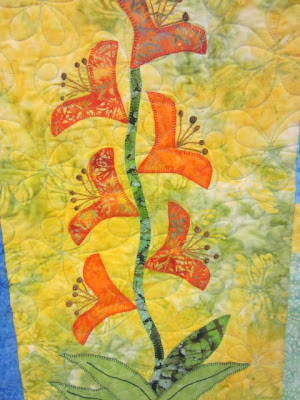 Finally, there was some sort of challenge category called "Inner You" with some interesting entries.

This one is called Inside Out, and the makers are not identified on the labels for these challenge quilts. 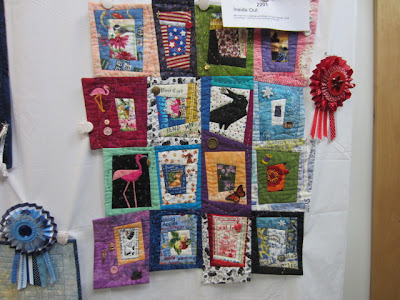 The quilt depicts many of the maker's interests. HMMM, we might be clones! 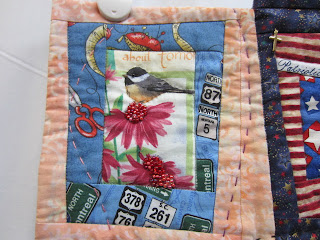 Another entry in that category is rather clever, called Exposed by Bits and Pieces. 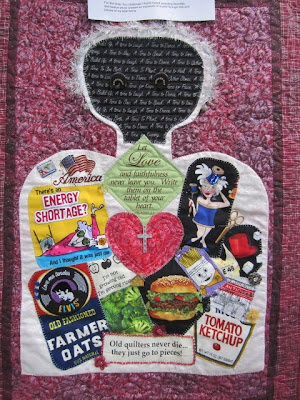 This was my favorite part.  I must look for that "Spool Lady" fabric. 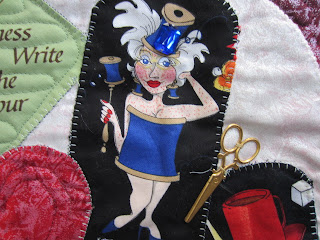 We are back in Ashe County this weekend, and it is starting to look like fall.  We bought some mums today and they are ready for planting.  It has rained off and on today, so I better get out there during a lapse in the showers!