The weekend before last, we stopped by Greensboro, NC on the way back from the mountains to deliver the crib "bumpers" that I made to match my great-niece Ragen's quilt. 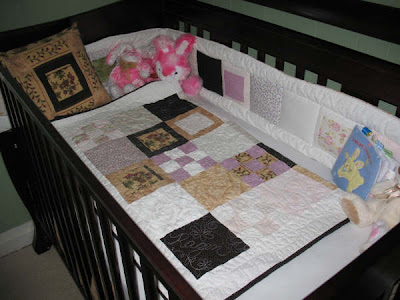 Let me tell you, this project was quite challenging for me! Not the patchwork, which were easy squares. I made the bumpers in one long length, to be tied with ribbons at the crib corners and other locations. The big problem was my choice of batting. Not one, but two layers of high-loft batt! I wanted it to be soft. But with all that stuffing, these bumpers were unmanageable. I decided to quilt along the white strips and then along the square borders. The edges are top-stitched...except where the whole deal was too fat to fit under my sewing machine foot! Anyway, they look good. My niece Melinda sent pictures, including this one of the corner of the quilt with Ragen's name quilted in. 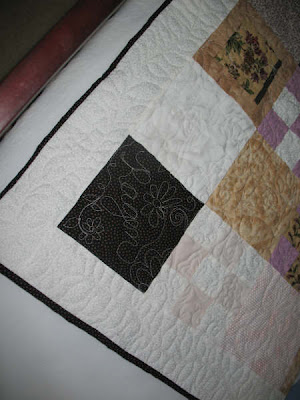 Last Friday, the elementary school where I teach celebrated its 80th birthday. We had a parade around the block with each grade level dressed in outfits representing a different decade. How fun to see Punky Brewster, Jane Fonda, hippies, poodle skirts...and here I am in the thirties outfit I wore, since I teach fifth grade.

It was interesting to see how the students reacted to me in my old-fashioned looking dress and hat.
There was one fifth grade boy who occasionally has bad days and acts out. I had a slight confrontation with him about a month ago. Well, he was dressed in a black suit and was looking very handsome. When I saw him in the hall, I commented about how nice he looked. He walked right by without saying anything. About two minutes later he came back out in the hall on an errand, walked by me, and said, "So do you" very quietly. :)
Friday night we spent the night with son Dave and his wife Emily, who was celebrating a birthday weekend. This was the first time we had spent time with them in their new house in Cary. Here is a picture of them by their tall dogwood tree in the front yard. 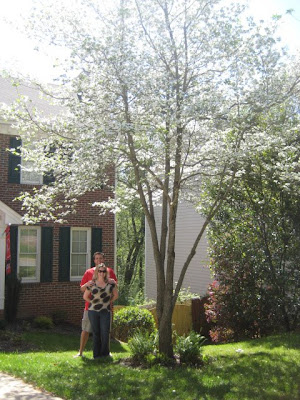 After that, Charlie and I worked in our yard the rest of the weekend. He cut grass, trimmed, and raked up pine cones and branches. I planted flower seeds, weeded, and bathed the dog. It was good to get these things accomplished. 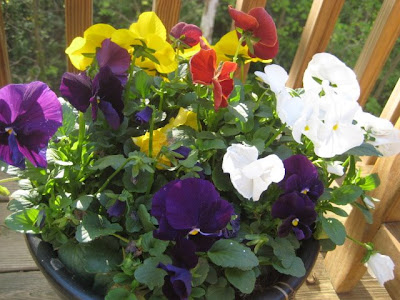 I hope you also had a good weekend!
Posted by Jeanne Turner McBrayer at 7:59 AM

The quilt and bumper for your niece is so pretty!

That is a cute story about the boys who was being a bit of a trouble-maker before. Sweet that he came around a bit! :)

What a lovely crib ensemble Jeanne. And is this the son whose apartment burned down? Oh I do hope so - they look so happy next their their tree in their front yard in front of their house!

Regarding the little boy and black - THOSE are the moments that make teaching worth while!

Hey, Jeanne, thanks for the nice comment on the tee shirts.

I have also just discovered we have more in common than just QA. I am a HUGE Fan ofboth of Herself (she got me looking into my Scottish Heritage) and Evanovich (as I once was a Jersey Tomato).

The crib set is lovely BTW and I am way jealous of your weather, we had 2 days of snow over the weekend.

Your story of the young man in his suit was worth the price of admission.

sweet! If you ever want to stop by the studio when visiting your kiddos let me know - I'm in Cary too.

I love the incident with your student - so many of them are softies inside and really need every nice word they get. Teachers like you are my heroes!