Of Dirndls, Deer, and Drama

When my husband was younger, he was first chair trombone at Grimsley High School in Greensboro.  He did not pursue being in the band at NCSU because it conflicted with the ROTC program.  However, when we had been married for a few years, he joined the Little German Band.  This volunteer group was started by staff members at N.C. State, and Charlie was working in the business office at the university.  We had some great times with the band, who played for free beer!  We traveled with the band to Germany and Austria in 1976.  I bought a dirndl in a beautiful lake village on St. Wolfgangsee, Austria. 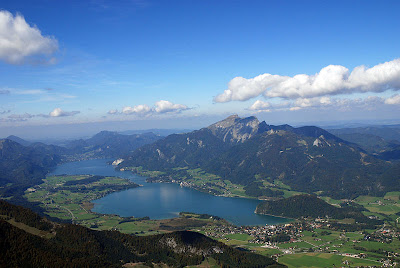 Sometime during that wonderful European trip, we conceived our first son.  He was promptly nicknamed "Helmut" by the band members!

Anyway, as I was de-cluttering and re-organizing my closet, I came across my dirndl.  I am sure I could not even zip it up any more, and have not worn it in many years.  Charlie quit the band when our boys were little, and only played once more when the band had a big anniversary re-union.  But, this costume holds very fond memories for me. 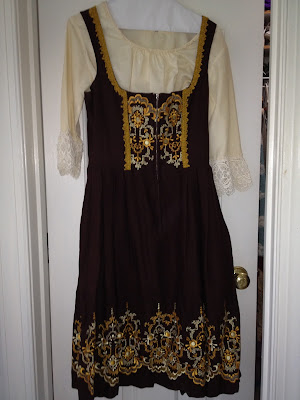 There is gorgeous hand embroidery work. 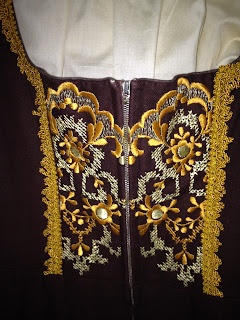 Look at the lavish amount of lace on the sleeves. 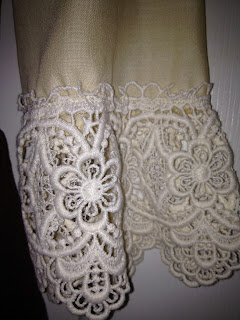 Anyway, I wanted to offer the costume to someone in the Little German Band or Dance Group.  I found a website with a contact e-mail address.  Soon I had an interested band member who wanted the dirndl.  Since she lives in Apex, she offered to send me a pre-paid UPS shipping label.  When I received it yesterday, I loaded up the package and the dog.  I figured we would go for a walk on the nearby greenway after shipping the box.  There is a UPS store a mile from my house, so I went trotting in...and found out that the label was from Fed Ex, not UPS!

I could not think of a Fed Ex location in Wake Forest, so I cruised through downtown and along Main Street.  No dice.

Then, I remembered my i-Phone.  Surely "Siri" could help me! 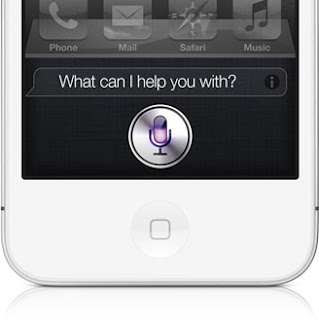 Have you met Siri?  She is the voice that allegedly helps you manage your life via the Internet, your calendars, contact lists, etc.  There is a commercial on TV where she forecasts the weather, finds a restaurant that delivers tomato soup, sets a reminder to clean house, and plays dance music.  All instantly.

Siri does not speak "Southern" very well.  The usual reply to my inquiries is "Sorry, I don't understand what you mean."  After about eight fruitless tries, she finally turned up three Fed Ex locations, all seven miles away or more.

So, Kasey and I drove to Raleigh and found the Fed Ex store, which my i-Phone told me was on the opposite side of US 1 from where it is actually located near the Best Buy store.

Mission accomplished.   Now, since we were in North Raleigh, maybe we could walk on a different greenway that we had never tried.
Siri reminded me that Camp Durant was just a few miles away.   This hidden-away jewel has a lake, a small wildlife zoo, and lots of trails.  It was the location of the Field Trip from Hell when I took my special education class there one year to walk the nature trail.  One of my little autistic students decided to walk in a swampy area, got his feet stuck in the mud, and guess who had to go pull him out.

I got him out, but one shoe and sock remained in the mud.

This did not sit well with the little fellow, who commenced a screaming fit while I retrieved the muddy footware, attempted to clean it off with a Kleenex, and tried to convince him to put it back on.

Oh yes, and two of the other boys got in a fight on the trail, and the little girl petrified of bees had to be practically dragged along the path.

Anyway, I saw that there was a greenway trail head on Camp Durant Road, so we tried that first.  It was very shady and inviting. 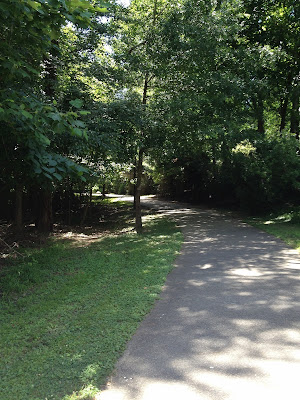 It also followed alongside a creek that was strewn with large boulders. 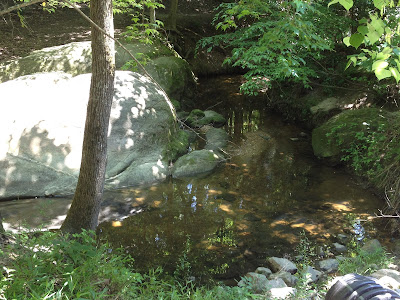 We had only walked for a few minutes when I spotted a deer grazing across the creek. 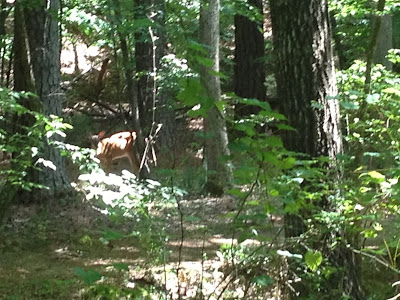 Kasey was more interested in the squirrels, rabbits, and birds, and sticking her nose in the greenery along the edge of the creek. 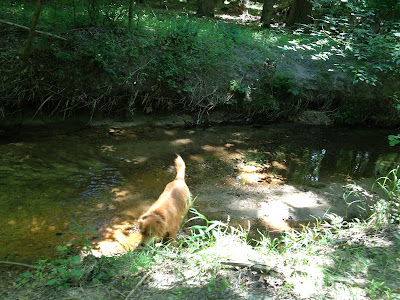 On the way back,  I saw a deer crossing the greenway in front of us. 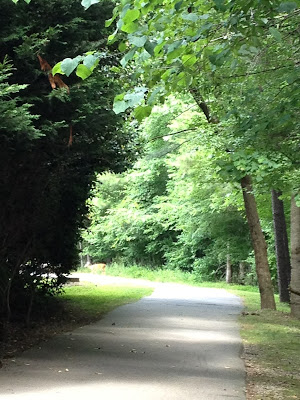 As we approached, we saw there were two deer calmly grazing in the grass in the adjacent neighborhood. 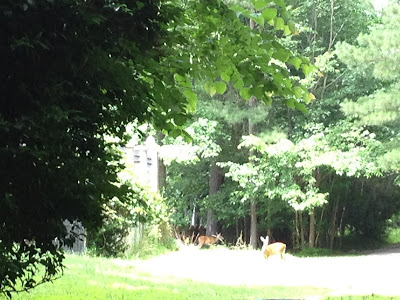 The deer that live in the woods near Camp Durant must be very used to people.  They did not run off as I approached with my dog and clicking camera. 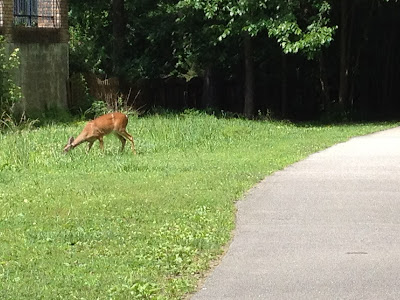 That was a lot of fun.  I am sure we will return to this area to walk again next time Siri sends me to Raleigh!

Last night we went to our last performance of the season in the Broadway South series at the beautiful Durham Performing Arts Center. 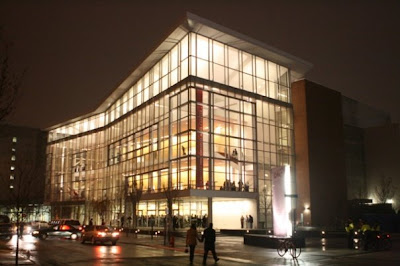 We saw one of my favorite musicals, West Side Story.  As always, I was impressed with the musical talents of the cast.  The man who played Tony had an amazing voice that filled the theatre with songs of love and longing.  We have enjoyed the performances so much that we signed up again for next year.  The shows will include Jersey Boys, War Horse, Sister Act, The Million Dollar Quartet, Mary Poppins, and Priscilla, Queen of the Desert.  Wonder if they will re-enact the ping-pong ball scene from the movie?  If you don't know what I'm talking about, rent Priscilla and find out!


Posted by Jeanne Turner McBrayer at 10:18 AM

Very nice article, especially the fond memories of the dirndl