Okay, so it's back to quilting this week.  Last year I volunteered to quilt a large number of donated quilt tops and backs for the Quilts on Wheels program at Capital Quilters Guild.  I finished thirty!  But the last group of donated tops that I brought home had a problem.  Most of the quilt backings were not large enough to mount the quilt on the longarm.  When you are quilting by hand or by domestic sewing machine, you can get away with the same size or a slightly larger backing.  That won't work when you have to pin the backing to the leaders of a longarm.  I like to have four inches of backing fabric on each side, if possible.


Monday, I spent the afternoon adding eight-inch strips to the bottoms and sides of at least five quilt backings.  None match.  All are now big enough to load up, though!

I also got the binding made and applied by machine to the little blue baby quilt. Navy blue seemed to work the best.   I have it hemmed about a third of the way around.  That's a chore I can do in front of the TV.  Or maybe at my quilt bee on Thursday night. 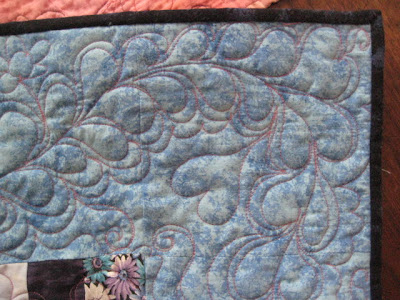 So, on Tuesday, I decided to start with a St. Patrick's Day theme top,  which might get delivered to a nursing home in time for the March holiday.  Or given to somebody Irish.  Or just someone who likes the color green. 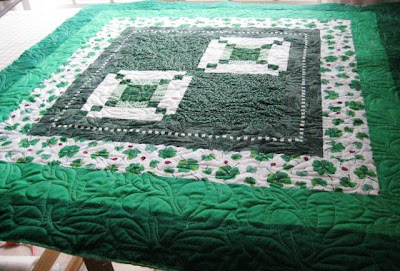 This top was very nicely pieced.  Sorry I don't know the piecer- many quilters just drop off their finished tops anonymously at the guild meetings.That  narrow little border is a striped fabric.  The shamrock border has little lady bugs. 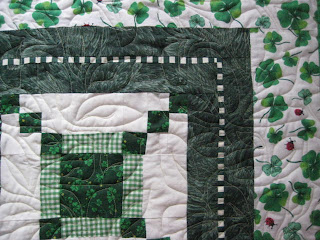 I had the thing all mounted and ready to begin.  I always do free-motion quilting from the front of the machine.  I put in the needle, brought up the bobbin thread, pushed the "go" button...and nothing happened.

The light was on, the single-stitch button on the left worked, but the switch on the right handle must have died or shorted out.

I was beginning to think it might be time to spend the afternoon cleaning the sewing room.

On the newer Gammills, it is easy to change a switch.  Pull off the cap, pull out the old switch, plug in the new.

On mine, you have to solder the new switch to the wires.  That's a job for Duh-Hubby. I mean Dear Sweet Husband.

Then, I had the brilliant idea that I could do a pantograph pattern from the back end of the machine.  A quick check showed that both switches worked on the back.

Hmmm...what pantograph to use?  Pantos are large rolls of paper that have quilting patterns you can follow with a stylus.  You can lay out the pattern the whole length of the twelve-foot table.  I have a laser stylus that projects a little red dot on the pattern.

I thought, well, I haven't done one in six years.  It doesn't matter which pattern.  I need the practice!  So, with this leafy green quilt, I pulled out the first one that had leaves in the title.  It's by Linda Taylor, and I remember that I chose it for my friend Cathy Carter's quilt.

What was I thinking?  This pattern requires two passes for each roll.  It takes forever!  Look at all that stitching!  It looks like a lovely texture now that it is done. 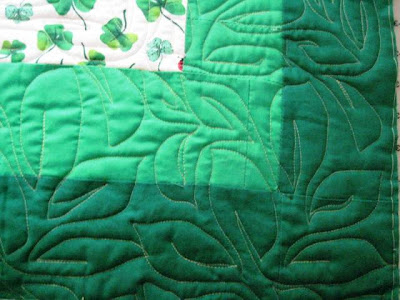 When I got ready to start, I realized that I had removed the Style-Laser from the side of the machine years ago.  It is mounted near the thread cone, and I didn't see any need for it to possibly get in the way of my thread path.
Guess what?  I remembered where I put it, but it was in pieces.  I tried to put it back together.  Somehow, something was missing.  I couldn't figure out how to keep the stylus from slipping out.
No problem- about six inches of clear packing tape took care of that problem! 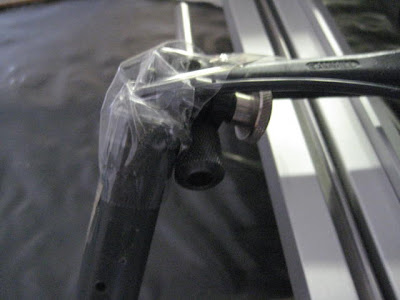 I remembered why I dislike doing pantos.  It's kind of boring, sort of like tracing a line for several hours. And sometimes I get seasick doing a long row on a big quilt. And sometimes the thread breaks, but since the needle is on the other end of the machine, sometimes you don't notice and keep on stitching with no thread.
Also, I have this directionality problem.  A couple times I lost my way on this complicated pattern and double-stitched.  If this was a customer quilt, I would be frogging today.  (Rip-it, rip-it, rip-it out) but for a rest home wheelchair quilt,  I think it will be okay.
The backing is a light green and white stripe, although it looks gray in the photo.  I do like the sculptural look of the quilting. 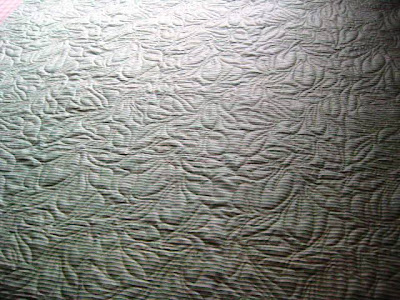 When I finally got this done, I decided to quilt the little green and blue floral star quilt that Carolyn pieced together at our bee's sew-in day in January.  We are meeting tomorrow night, and it would be nice to have it ready to give back to her.  When I was mounting the quilt from the front of the machine, I forgot about the dead switch, and by habit I pressed the Go button.

No problem at all.  Maybe the switch is not dead, just loose somewhere.  I crossed my fingers and kept going.  Got 'er done!  This quilt is still on the machine, but it looks real cute.l 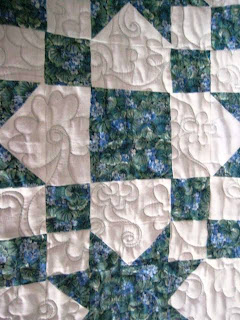 I'll take better pictures later.  If my switch decides to work today, I'm going to work on Tonya's quilt this afternoon.  If not, I have plans for my personal mechanic tonight!
Posted by Jeanne Turner McBrayer at 10:56 AM

Sounds like a comedy of errors. But alls well that ends well! :-)

you are amazing! so are the quilts!