I hope it is as beautiful where you are today as it is here in Wake Forest, North Carolina.  The sun is shining, there is not a cloud in the sky, and it is 52 degrees Fahrenheit.  Raleigh is hosting the National Hockey League All-Star weekend, and couldn't have asked for better weather.

Kasey and I just came back from a long nature walk.  They have continued to work on the new section of the Heritage development across Rogers Road from our street.  Unlike the older section which is named for golf courses, the streets here derive their names from flowers and nature.  Here is one that made me smile: 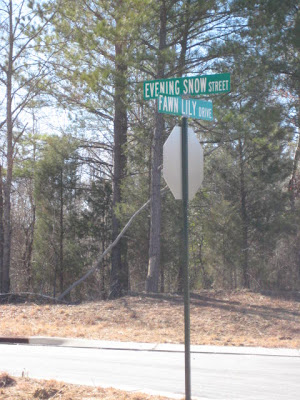 I like the name Evening Snow Street, but I LOVE Fawn Lily Drive!  I will have to show that one to my granddaughter, Lily.  I did not know there was a flower named Fawn  Lily, but I googled it and found that there is, indeed.  Maybe I will start calling my granddaughter Fawn. 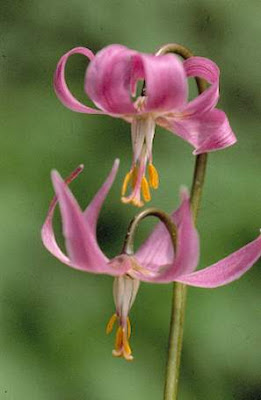 I like walking the dog in the new neighborhood, because there is no traffic.  Just wide open spaces and nice paved roads. 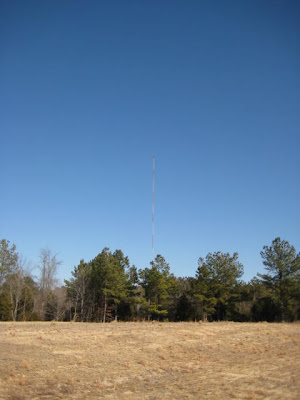 The new roads ramble all over through pine woods.  There is no chance of getting lost.  You can hear the traffic from Rogers Road, and then there is this homing beacon. 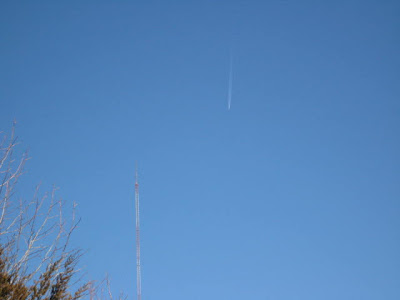 That's the antenna for WCPE.  It is actually on Chalk Road, but as the crow flies, it is through the woods right behind our house.  We like to sit on the screened porch during thunderstorms and watch lightning hit the tower.  WCPE is known as The Classical Station, and is available via the Internet and satellite and cable TV stations as well as FM stations.  Back in 2003 they increased the height of the tower, and we got to watch men working 1200 feet in the air.
And here is the old homestead on Shasta Daisy Road.  Too bad it was in such bad shape that it could not be preserved. 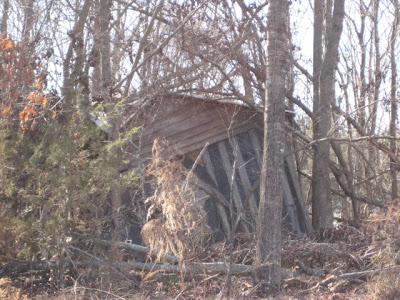 It now sits only about 100 feet from these new homes being built in very close proximity to each other. 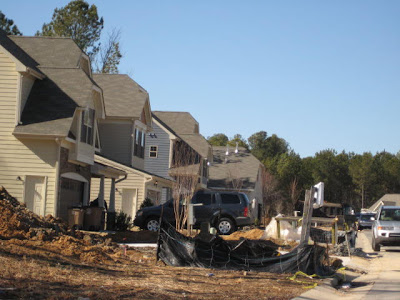 This is the finished part of Heritage View Drive, which is actually my same street, but across Rogers Road.  I think it looks pretty with Forgotten Pond in the background. 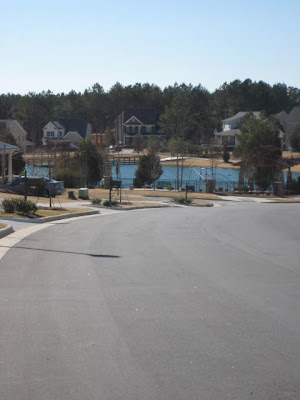